The Potala Palace, The Highest Ancient Palace in the World

The potala palace, located on maburi mountain, northwest of Lhasa, capital of Tibet autonomous region, is the highest building in the world. It is also the largest and most complete ancient palace complex in Tibet.

The potala palace is built along the mountain, with overlapping buildings. It is an outstanding representative of Tibetan ancient architecture (it is said to be originated from sangzhuzi castle). It is the quintessence of ancient architecture of the Chinese nation. The main building is divided into the White House and the red palace. The main building is 117 meters high, with 13 storeys on the outside and 9 storeys on the inside. Potala palace in front of potala palace square, is the highest city square in the world. 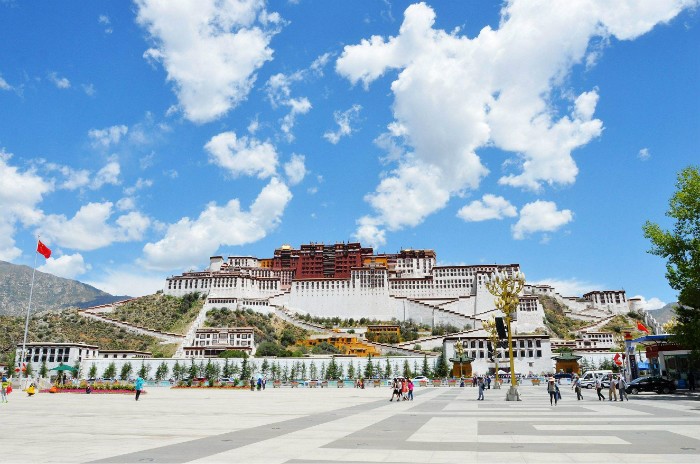 The potala palace was originally built for the tubo dynasty of zampu songtsan gampo to marry the princesses of ruler and wencheng. In 1645 (qing shunzhi) two years of the qing dynasty territories and special khanate period to recognize the great gushi khan and the dge-lugs-pa regent south gyi reconstruction after the potala palace, as the dalai lama’s winter palace residence, as well as the major religious and political ceremony venue, and consecrate successive dalai lama spirit, the old and in Tibetan minister government center for dominance. From 1988 to 1994, another major renovation was made.

Potala palace is the holy land of Tibetan Buddhism, and there are countless pilgrims and tourists here every year. In March 1961, it was listed by the state council as the first batch of national key cultural relic protection units. In December 1994, UNESCO listed it as a world cultural heritage site. In January 2013, the national tourism administration listed it as a national AAAAA scenic spot. From November 1, 2018 to March 15, 2019, the potala palace will be free of charge.

The 2019 China Tourism Development Report Has Been Officially Released
Chinese Language, Mandarin, Dialects, Characters and Pinyin
Suzhou Silk: A Treasure of History and Culture, the greatest creation in the world's primitive agric...
Contention of the Hundred Schools of Thought in China