Although in the western zhou dynasty (11th century bc-771 BC), weapons made of natural siderite, the earliest known iron wares in the world, were made. With improved craftsmanship, iron weapons became ubiquitous in the late warring states period, extending into the qin dynasty (221bc-206bc) and the han dynasty (206bc-220bc). However, because iron weapons have little external processing, they are corroded when unearthed, making them more difficult to study and providing less insight than Bronze Age iron weapons, which were protected by a thin oxide layer. 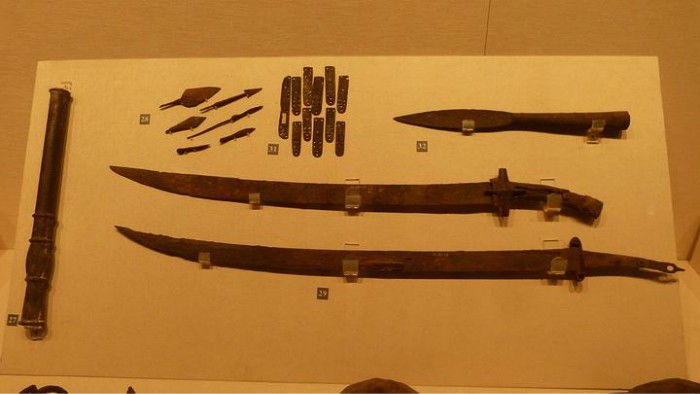 Cannons, or stone cannons, appeared in the late eastern han dynasty (25-220) and flourished during The Three Kingdoms period (220-280). When the enemy came, the garrison would put cannons on the gate. Turning to the lever, it threw the big stone parabolic over the wall and defeated the invaders. This is still reflected in Chinese chess – pieces representing cannons still follow the rule of attacking another piece only if there is a third in the middle.

With the rise of cavalry in the western han dynasty, there appeared a kind of rectangular shield that soldiers could hold with one hand. During the song dynasty (960-1279), it was tied to the left forearm of the cavalry and became round. Until the southern and northern dynasties (386-589), the long hexagon prevailed, with the shield facing vertically inward like a leaf. In battle, it can be held by hand or propped up on the ground with a stick.

During the western han dynasty, iron armor replaced leather armor and evolved into fine scales and plates. Scale armor displays a high level of technical know-how, with a set consisting of more than 2200 components. During The Three Kingdoms period, chainmail became popular to protect people from arrows. By the Ming dynasty, chainmail was gradually changing from heavy to light, but it could still withstand the blows of spears.

With the development of iron armour, not only soldiers but also horses were wearing iron armour. As a result, the halberd, used chiefly for stings and hooks, lost its place on the battlefield. The spear evolved into a spear, used only by cavalry and capable of penetrating.

The han dynasty was a critical period for the development of Chinese warships, large and small. The OARS of the western han and the rudders of the eastern han were brilliant achievements. Scull, a precursor to the modern propeller, improved efficiency by changing the way it jerks from side to side, front to back. The steering wheel provided the oar with the flexibility of its route, paving the way for European exploration. During the jin dynasty (265-420), large – scale warships stood out. It is recorded that there was a ship at that time. It had a large hull, 180 meters long, and could hold more than 2,000 people. At the top was a fixed wooden city, and the horse could gallop through four gates. During the sui dynasty (581-618), a very large ship more than 30 meters high was built, which could hold 800 people. Before the southern song dynasty, almost all armies used warships. Examples recorded are the 110 m tower, skirting board and wheel paddle.

Four Great Inventions, Paper Making, Gunpowder, Printing Technique and Compass
China's Acrobatics, Which is the Best in the World
Mount Qingcheng - One of the Four Famous Taoist Mountains in China
Bifengxia Panda Base in China