Dunhuang Yardang national geological park is located in China’s gansu province, 108 kilometers (67 miles) northwest of dunhuang city. It extends 25 kilometers (15 miles) from east to west and 13 kilometers (8 miles) from north to south. The park is famous for its typical wind-erosion landform, yalang landscape. Yardang means a small mound of earth with steep walls in the uyghur language. There are 77 sites and boulders of various shapes in the area. 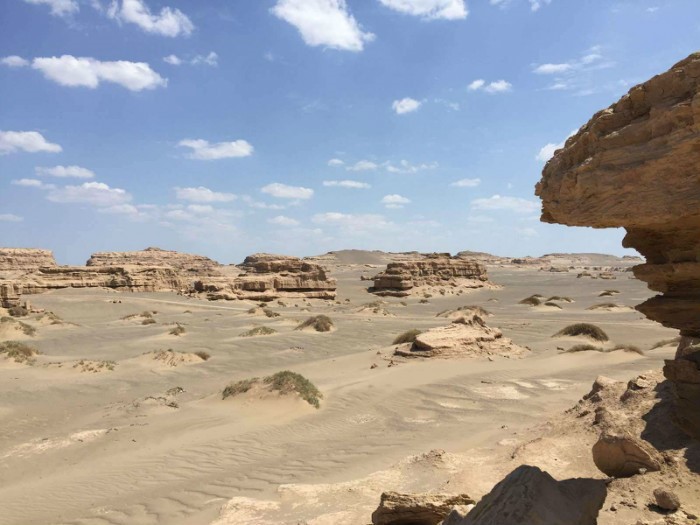 It also has a nickname “devil city” because when night falls, the wind will roar. There is a legend in this area that the park was once a castle, but a god turned it into a ruin as punishment for evil. Yardang national geopark attracts many explorers with its unique desert landscape, ancient legends and exotic rocks.

Dunhuang Yardang national geopark is divided into the southern region and the northern region. The northern region is characterized by the golden lion greeting, the sphinx, the peacock standing gracefully, and the western sea fleet. The first three are all solitary, and the last is a group of men, like a fleet of sails. The north is strewn with strange rocks. The south is even bigger, with rocks dotted like cartoon characters and traditional Chinese paintings.

Take the shuttle tourist buses for the northern region. During the 1.5-2 hours journey, the bus will stop for 10 minutes at the Gold Lion Greeting Guests and Sphinx, and 30 minutes at the other two spots. To get to the southern region, visitors can rent an off-road vehicle at the Western Sea Fleet at a cost of CNY 400 per car. The journey usually lasts for 1.5 hours. It is freer to go sightseeing in this way, and the driver may stop at wherever visitors want. If time permits, make sure you not miss the beautiful sunset over rolling hills. The sunset usually occurs between 6:00 pm ~ 7:00 pm from October to March and 8:00 pm ~ 9:00 pm from April to September. In northern region, visitors can see the sunset at the Western Sea Fleet. There is also a hilltop in the southern region to catch this stunning scene. Due to the large temperature variation between day and night, as well as the windy and dusty weather there, visitors are suggested to ready hats, sunglasses, and jackets.

West Lake - The Most Popular Place in Hangzhou, has a total area of 49 square kilometers
Daocheng Yading, the Last Pure Land
Du Fu, Du Shaoling, Zimei, One of the Greatest Poets in China
The Charm of Sweet Tea