Yuyuan Garden is a famous classical garden located in Anren Jie, Shanghai. It was finished in 1577 by a government officer of the Ming Dynasty (1368-1644) named Pan Yunduan. Yu in Chinese means pleasing and satisfying, and this garden was specially built for Pan’s parents as a place for them to enjoy a tranquil and happy time in their old age.

The designer of the garden used the space brilliantly. Strolling through the Yu Garden is really like walking through a photo album of ancient China and every page is a totally different scene. Every single corner you take a turn, you are taken into an entire new picture. For instance: If you are looking at a beautiful rockery, and turn the corner, suddenly you are facing a large pond filled with goldfish with a pavilion. Turn another corner, and you are standing alongside of a small stream surrounded by bamboo groves. Turn another corner, and you are suddenly in a small courtyard built around an ancient tree and filled with flowering plants.

Yu Garden was originally founded in 1559 during the Ming Dynasty by Pan Yunduan as a comfort for his father, the minister Pan En, in his old age. Pan Yunduan started the construction after failing one of the imperial exams. In 1577, Pan Yunduan resigned and concentrated in building the garden. He hired some famous horticulturists to design the layout of the garden for him. The garden was the most well-known and the largest of its period in Shanghai City, but finally its cost helped the bankruptcy the Pans.

The gardens went through damage for a couple of times during the 19th century. In 1842 during the First Opium War, the British army used the Huxinting Teahouse as a base of operations for several days. They were damaged again by the Japanese in 1942. Then from 1956 to 1961, it was repaired by the Shanghai government. They were opened to the public in 1961.

There are six main tourist sections in Yu Garden. Each section has its own special sights. There are full of exquisite corridors, rivers, rockeries, and courtyards. Yu gardenThere are a lot of brick carvings, stone carvings, mud sculptures, and wood sculptures in the Yu Garden.

Originally built during the Ming Dynasty, the Yu Garden itself is a priceless cultural relic that contains a great variety of Chinese cultural components. Over the centuries the garden has been upgraded and rebuilt many times. Each rebuilding has only added to the overall beauty of the garden. Although the garden is relatively small in scale compared with some classic Chinese gardens, it does not detract rather enhances its beauty. The buildings, rockeries, and water features of the Yu Garden are extremely exquisite and no less attractive than the most famous gardens in China. All of these give the Yu Garden an irresistible charm making its visitors always want to come back to see it again.

It is the mark of the garden. Zigzag Bridge is 18 meters long and 2 meters wide, totally composed of granites and jade stones. It is a perfect leisure site with a pond and fish, pavilions on both two sides, stone tables and benches in pavilions. Mid-lake Pavilion is a primitive but elegant tea house with great traditional features. 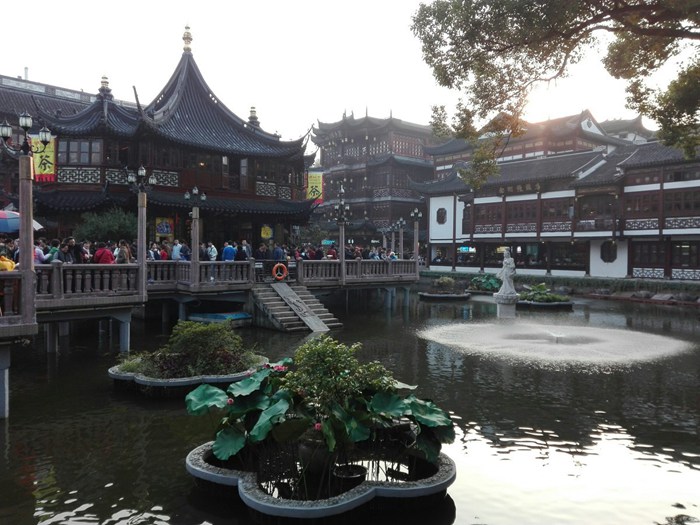 Upon entering Yu Garden, you will encounter a rockery, which is called the Great Rockery. With a height of 14 meters (about 50 feet),It is the oldest and largest rockery in the area of south Yangtze River with a height of 14 meters.On the top of the rockery, you can get a bird’s eye view of the garden.It is the first scene visitors can see when entering the garden.  The top of the rockery is the best site for a bird’s view of the garden. At the foot of the rockery, there are surrounded old trees, beautiful flowers, a Cuixiu Hall as well as curio shops. 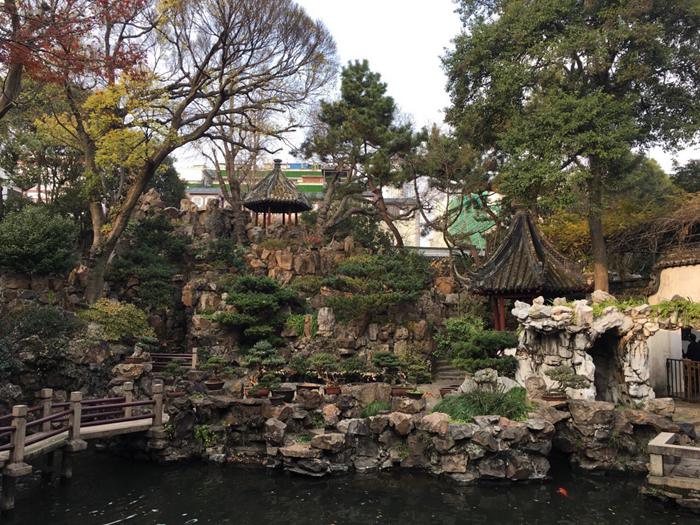 The grotesque rock is one of the three famous rocks in south of the Yangtze, together with Duanyun Peak in Suzhou and Zhouyun Peak in Hangzhou. It has a height of 3.3 meters and 72 holes. Interestingly, if burn a joss stick at the bottom of the rock, the smoke will surprisingly rise from all the holes; similarly, if pour the water on the top of the rock, waters will flow out from every hole. To well appreciate this rock from Tai Lake in Wuxi, Jiangsu Province, the founder built a Yuhua Hall facing the rock and inside furniture is graceful made of top grade rosewood of Ming Dynasty. 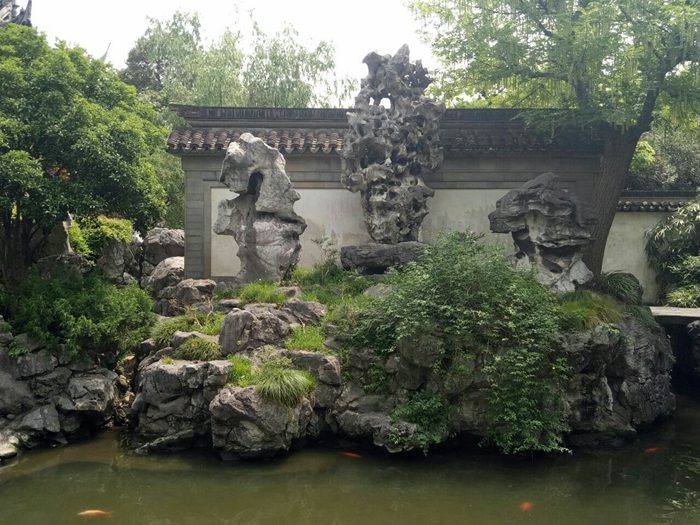 The highlights here are the fine window and wood-beam carvings of rice, millet, wheat, fruit and other emblems of a plentiful harvest. This place was used for a meeting place for local officials and for proclaiming imperial announcements. The name Sansui means propitious and lucky in Chinese. The hall is the main construction in Yu Garden with a height of 9 meters and 5 halls built in 1760. Originally used to entertain guests, it became the place for ceremonies of government as well as for gatherings of gentlemen and scholars in Qing Dynasty (1636-1911). It includes Grand Rockeries, Iron Lion, Cuixiu Hall. 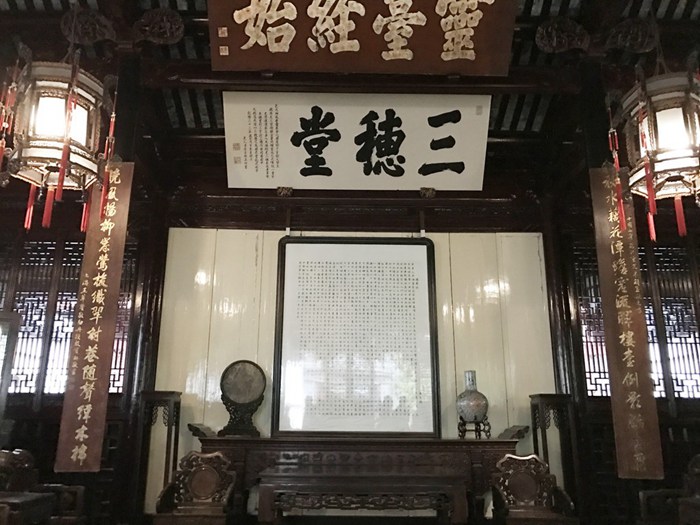 It has derious cloisters facing the pond. It is a superior place to admire the Great Rockery and to appreciate the cultural inscribed stones of Orchid Pavilion Series by the famous Calligrapher Wang Xizhi. 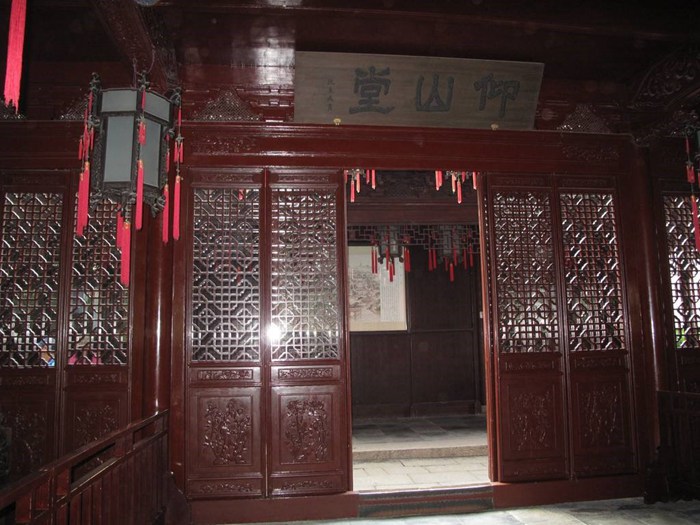 Weihai，Kown for the Weihaiwei Battle of the Sino-Japanese
Chinese Pottery, the Oldest Artwork of Human Beings
Qingyan Ancient Town, One of the Most Famous Historical Towns in Guizhou
Zhejiang Museum Exhibits Donated Artworks