Pandas have only a small number of offspring in their lifetime, making it difficult for baby pandas to survive. The giant panda population is growing very slowly because of the high specialization of breeding and breeding.
In addition to the mating season, pandas usually live alone and have their own activity areas. Female pandas are only in estrus for a few days a year, usually between march and may. Pandas have a gestation period of 83-200 days and are generally born around August.

A female panda becomes a mother panda, and to protect her cub, there is a heavy defense mechanism, not a gentle temper. No animal (including man) is allowed near its sacred child.
The strangest thing about giant panda breeding is that its newborns are born immature, weighing just 0.1 percent of their mother’s weight. Baby Panda weigh very little, about 145 grams on average, 51 grams at the lightest and 225 grams at the heaviest. For a female giant panda, babykeeping is a very difficult task, usually taking 18 months, sometimes even two years, until her next baby is born. 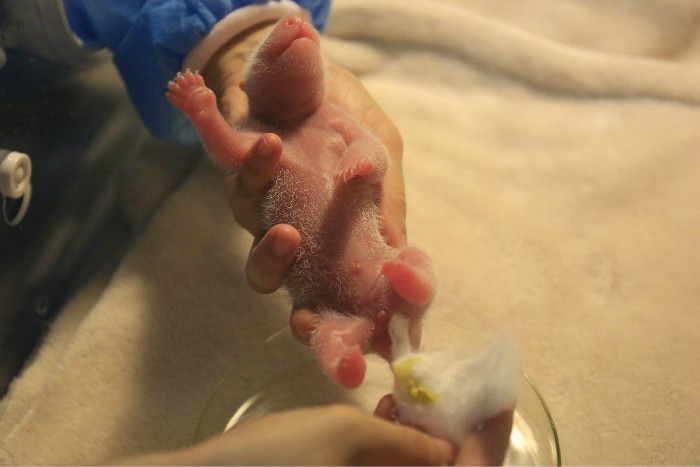 The newborn panda’s skin is pink with a thin white coat. Surprised by the giant panda’s long tail? In fact, the giant panda has a tail. The adult tail is about 20 centimeters long. The base is thick and the hair is usually white. However, the panda’s tail is so close to its hips that it is easy to overlook.

During the first few weeks of life, the mother holds the baby panda in her arms, keeps it warm and protected, rarely leaves it, and holds it in her mouth when it moves. If you see a mother panda licking her baby, it may help the baby poop.

After 1-2 weeks, the baby panda’s black hair area begins to deepen. Within a month, they have grown black ears, eye sockets, legs and shoulder straps, becoming more like their mother