Dunhuang Dishes, What to Eat in Dunhuang

In Dunhuang, a vibrant city in western China bordering xinjiang and heavily influenced by nomadic tribes, grilled lamb is a popular dish in restaurants and hotels. However, the cultural taste of Dunhuang cuisine is much deeper. They borrowed from four different dining styles; Including the awe-inspiring han dynasty (206bc-220)(mainly barbecued), the atmospheric tang dynasty (618-907)(mouthwatering, aromatic, visually perfect), the modern new Dunhuang (emphasizing the special appearance of dishes), and a variety of snacks from street vendors, local flavors, will satisfy the hunger of any visitor. 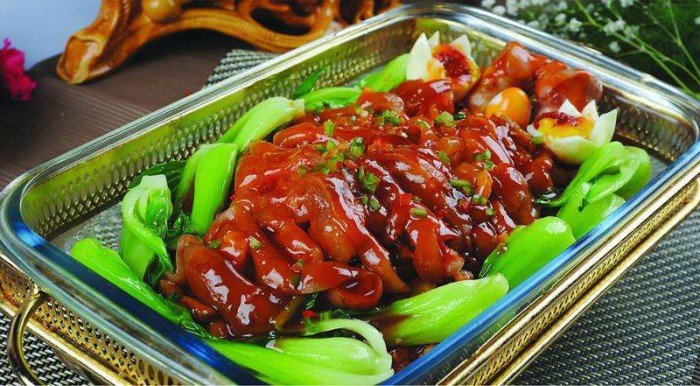 Developed and improved by chef and restaurateur zhao chang ‘an, Dunhuang cuisine is recognized as one of the eight new cuisines in China. First, we will introduce some traditional dishes.

A dish, also known as camel’s toe, gets its name from its resemblance to a camel’s foot. It is well known that camels were the most important means of transportation on the ancient silk road. They can travel long distances across arid deserts with the help of their four feet. Camel toe is actually a tendon, high nutritional value. Camels live long lives, are hard to find hooves, and are almost as valuable as brown bears. Wash the water chestnuts, marinate them until soft, season with seasonings, and steam them with the chicken for seven to eight hours until the bones are easy to remove. Cut the water chestnuts into pieces, put them into a steamer and let them simmer for 2-3 hours. Finally, make snow mountains out of egg whites and put them together in the shape of camel toes.

It is a kind of Lamian (dough stretched to form fine noodles). Yellow Noodles look like golden threads, tastes delicious and have a soft texture. They can be added to soups, or mixed with cooked vegetable dishes, and being savoury, makes a good appetitive. From the vivid painting in the Mogao Caves, we may know Lamian is a traditional food with long history.