Chinese furniture is one of those rare categories of art that appeal across generations and cultures. The furniture also follows the footsteps of times to develop and innovate continuously. It is an important foundation for the establishment of work and living space. By now, there are various categories with different material and applications. 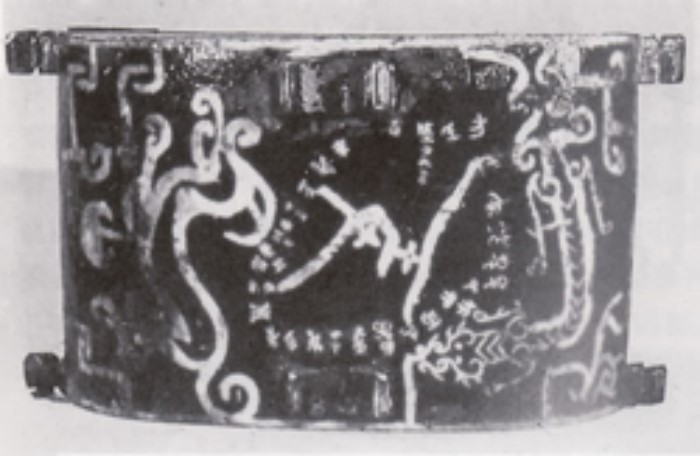 The lacquer wood was decorated with clamshell, which created a blueprint for mother-of-pearl inlay furniture.

Because there was a strong concept of ghosts and gods in people’s ideology at that time, the decoration patterns of Shang furniture tended to have a sense of solemnity, majesty and ferocity.

In the bronze ware, the decorative pot door (the four foot in plate shape, two symmetrical features between the front and back feet) has been in the history of Chinese furniture for thousands of years.

During Spring and Autumn Period

During the spring and autumn period, furniture of Chu style was the typical representative and the main source of lacquer wood furniture system in China. There are various categories of Chu furniture: all kinds of chopping block, exquisite lacquer case and table, distinctive small seat screen, the oldest bed. 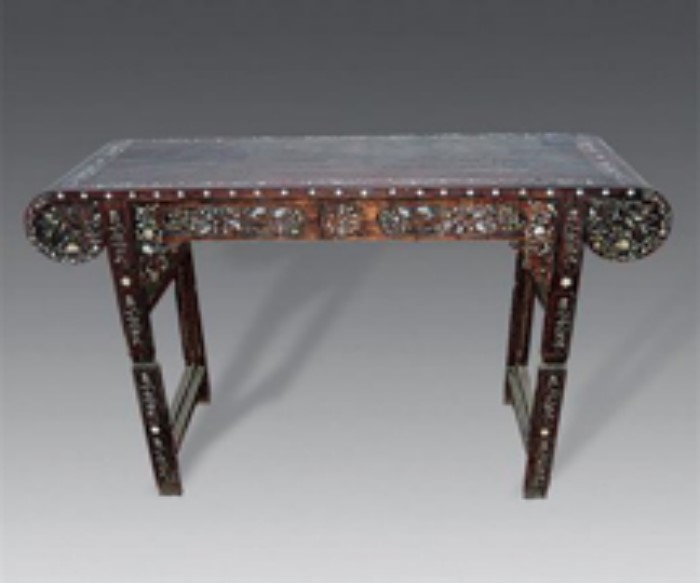 Painted wooden bed is the earliest bedding in our country.

The carving technique is widely used in the decoration of furniture, such as means of engraved and embossed. It was the precedent of the furniture carving.

Pingji(a kind of arm rest) in the “H” shape marked the development of industrial art from the heavy bronze to the light lacquer.

The process of bronze casting developed greatly, and the method of “lost wax” appeared.

During Qin and Han Dynasties

During the Han dynasty, Chinese feudal society entering its first golden age, the furniture technology of Han developed greatly. The outstanding decoration of Han lacquer wood furniture made it shining and exquisite. Besides, there are all kinds of jade furniture, bamboo furniture and ceramic furniture. And a complete set of furniture on the ground appeared, which could be regarded as the representative period of short furniture in China. 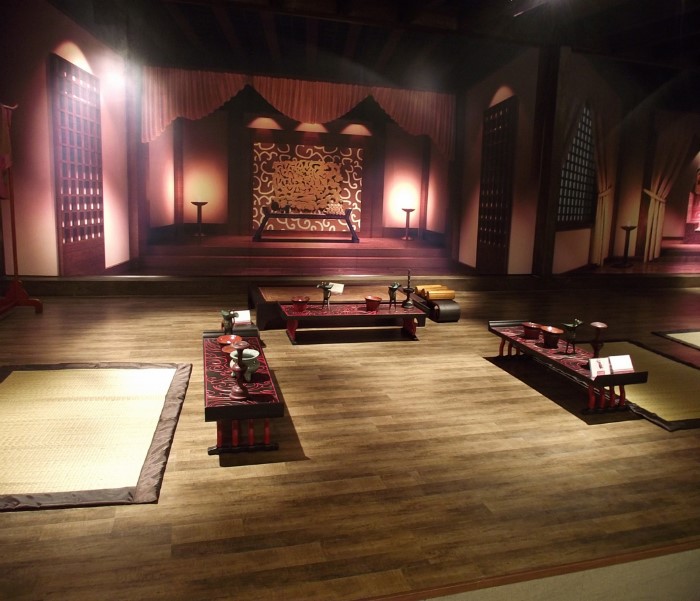 In the Han dynasty, there was a new type of small seat, which was the originator of all the seats.

Ji (the originator of table): There are more varieties, such as activity Ji, multilayer Ji, curled ear Ji, and even the embryonic form of table.

Couch screen: It is a new type of combination of screen and couch, which marked the birth of newly-developing furniture of Han dynasty.

Hutch and ark: It is a new furniture that appeared in Han dynasty, different from traditional box, which was used for storing expensive articles.

Dressing table: The earliest mirror image appeared in the mural of Han dynasty. A rectangular plate was set on the circular pedestal, and the round plate was on its top.

During Three Kingdoms and Jin Dynasties

Two types of furniture series appeared: tall and type. This period was an important transitional period in the history of ancient Chinese furniture between Han dynasties and Sui and Tang dynasties. Bed of Hu minority was introduced from ethnic minority areas and merged with furniture of central plain, which made furniture higher in some parts. Furniture such as chairs, bench come out and furniture with sitting and lying style was also gradually higher. But overall, short furniture is still dominant. 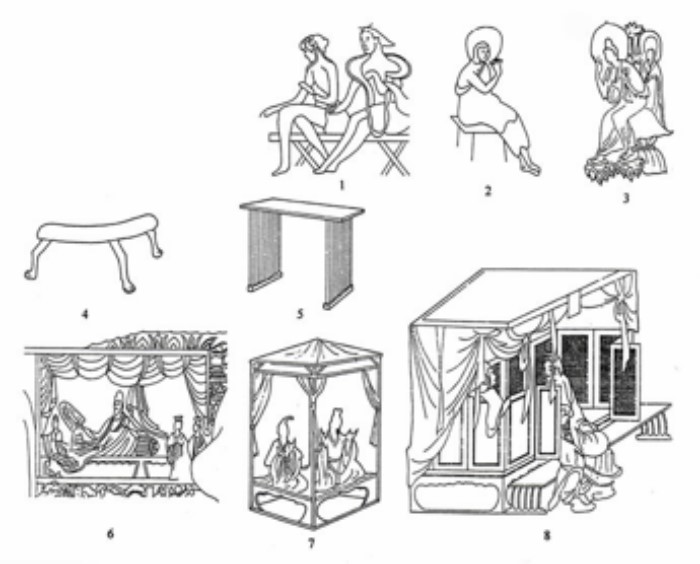 The furniture developed from short type to tall type.

It promoted the combination of the tall furniture and the original short one of central plains. For example, the bed was in gradually heighten, with bed top and mosquito net, suitable to sit at bedside.

Pingji(凭几): It is a kind of furniture used for people to lean on. The special Pingji for protecting waist with three legs appeared.

During Sui and Tang Dynasties

The Tang dynasty was the heyday of China’s feudal society. Furniture making entered a new historical stage on the basis of inheriting the past and attracting foreign culture and art. It pursued the fresh and free style in the production process and decorative arts. Thus the furniture style in the Tang dynasty got rid of the unadorned features of those in the Shang, Zhou, Han and Six Dynastyies, and replaced them with gorgeous and dignified style. 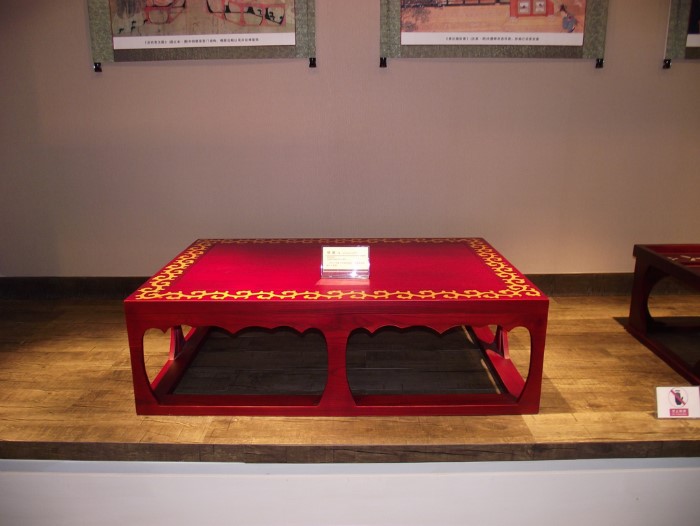 Tall and short furniture coexisted at the same time.

The kind of table gradually increased and was widely used in all aspects of life.

Rocking Chair evolved from Hu bed and gradually appeared in the secular society.

Drum-shaped Stool: Bodhisattva seat appeared in the Wei, Jin, Northern and Southern Dynasties, which was more exquisite and popular in the Tang dynasty, with more forms.

During the Five Dynasties 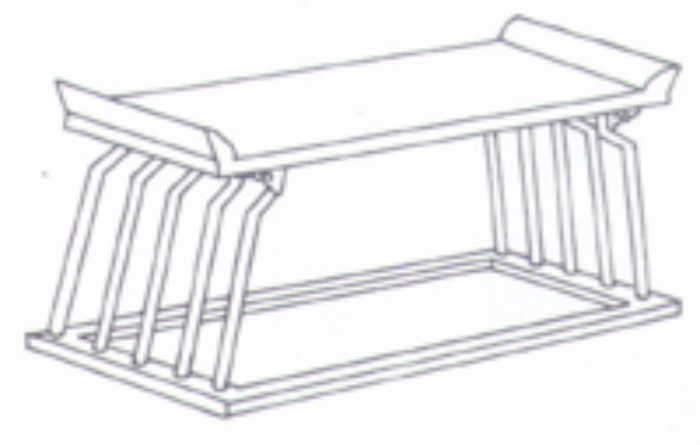 Furnishings changed from an infinitive pattern into a fairly stable furnishing pattern.

During Song dynasty, tall furniture had popularized to common family, such as tall bed, tall end table, towel rack, etc. At the same time, a lot of new products appeared such armchair, drawer, etc. Furniture of the Song dynasty was concise and neat, graceful and elegant, featuring with the simple style and no overelaborated adornment. While it also lacked grandeur. 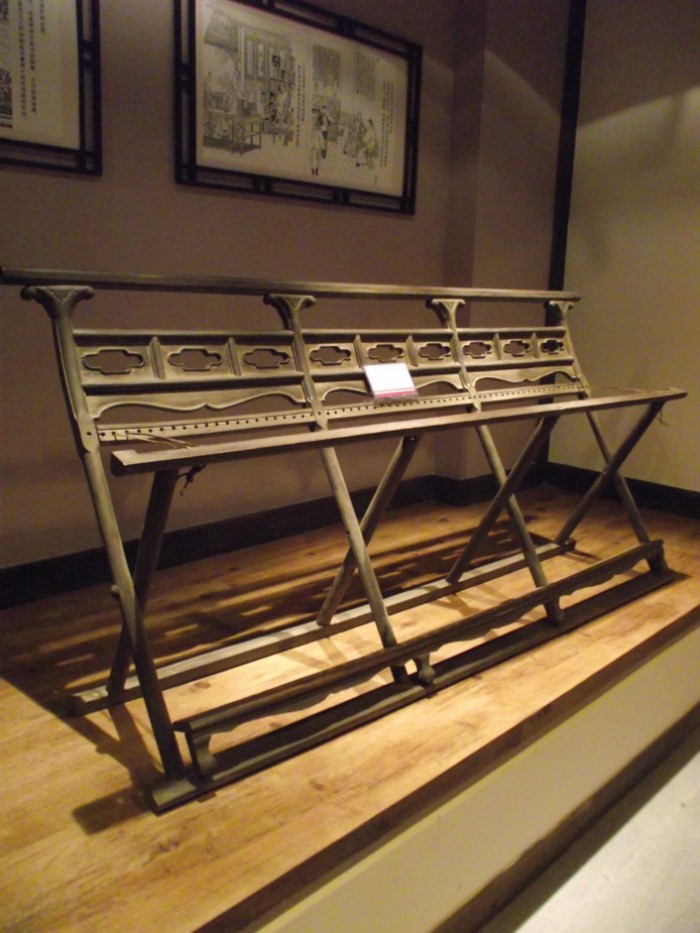 Table and Chair: It laid a foundation for further development of frame furniture in Ming and Qing dynasties. Armchair named after official rank appeared.

Screen: Every family must have screen, so people more emphasized its position. Aesthetic meaning was greater than practical value. 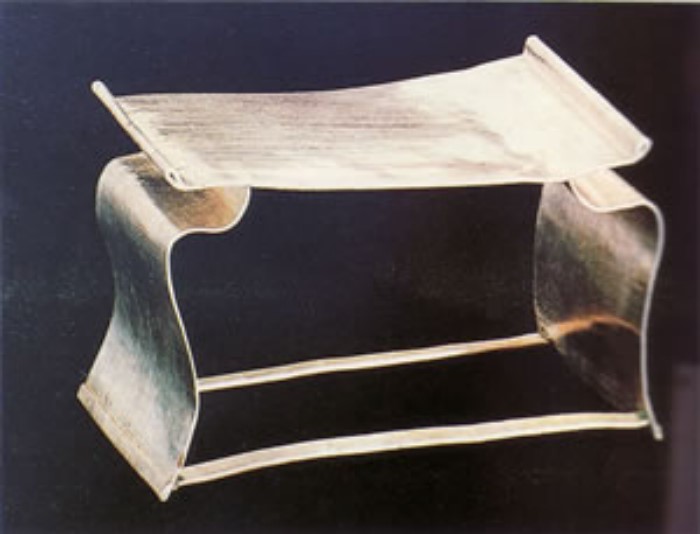 Bed became large due to the body size of Mongolian.

The table basically inherited the shape of that in the Song dynasties, but high table became more and desk drawer appeared.

Ming dynasty was the glorious period on the development of Chinese classic furniture. Chinese ancient furniture experienced the development of thousands of years and reach an unprecedented level in Ming dynasty. The hardwood furniture was highly praised and appreciated. It paid much attention to choose material that needed to be hard wood with high intensity, fine color and lustre, decorated with wax to show its natural texture and color. From now on, Chinese traditional furniture entered an unprecedented new era represented with “hardwood furniture”.

The characteristic on modelling furniture was to pay attention to beauty of lines especially. Carving techniques were mainly relief, openwork carving, circular engravure, etc. The way of carving was exquisite with fluent line, vivid and lively. The place of carving was the backboard of furniture, tooth board, enclosure, etc., only doing carving in small area. 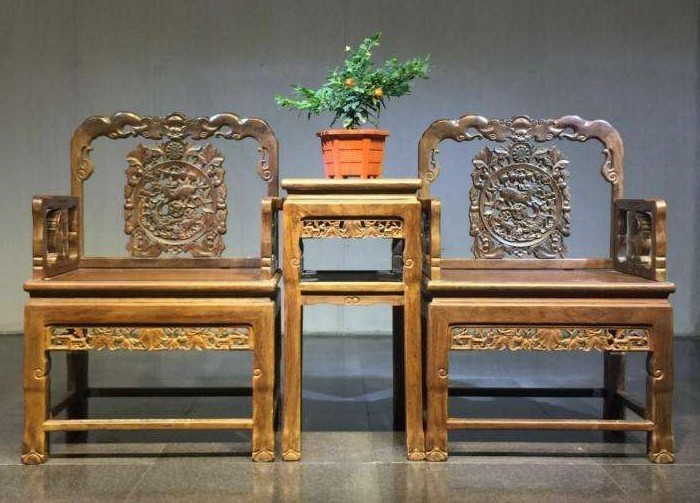 Chair: It began to use hardwood manufacturing, with fine quality and wide varieties, such as official hat chair.

Screen: The screens are more elaborate. The styles are six, eight and twelve screens, in particular, the famous “Slanted apron(披水牙子)”.

The furniture craft of Qing dynasty was exquisite and reached the peak of feudalism. In the process of inheriting the traditional furniture making technology, it also absorbed the foreign culture and formed the distinct style of the times. As a result of economic prosperity, it formed the styles of different area such as Guangdong style, Suzhou style , Beijing style , etc. Due to Qing dynasty was closer to our modern society, some of the object was left and it has great influence to us. 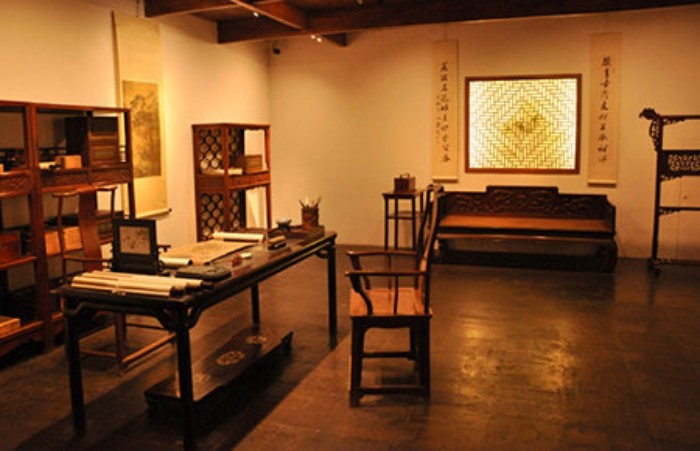 Back-rest chair: It had great development on the basis of that in Ming dynasty.

rectangular spirals was the most representative decorative patterns.