Huangshan Travel Guide, Marvel at the peculiarly-shaped rocks and pines on the Yellow Mountains

Huangshan is in the east of China and close to Shanghai. It is one of the most popular tourist destinations in China. Huangshan is steeped in picturesque natural landscapes and history. Marvel at the peculiarly-shaped rocks and pines on the Yellow Mountains, appreciate the ancient-styled dwellings in Xidi and Hongcun villages, then have a taste of Huangshan’s most famous tea — maofengtea , one of China’s top 10 teas. 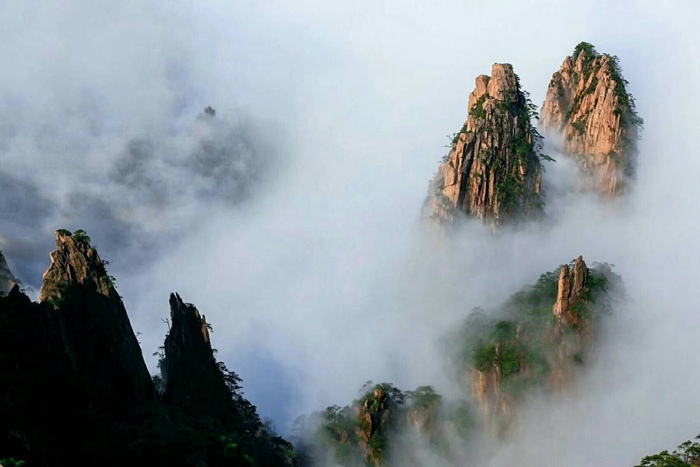 The Best Time to Go to Huangshan

Mount Huangshan is usually mild and humid all year around, as the features of the Subtropical Monsoon Climate. The yearly average temperature is around 10 °C. The highest temperature is about 33 °C in August, and the lowest is -3°C in January. There is a big temperature difference during daytime and night. Remember to bring a warm cloth for the early morning sunrise watching. Rainfall is plentiful on the mountain, mainly from June to October. Chances are big to have a mist day or a rainy day, so you’d better check the weather forecast before you travel.

Summer — Pine and sea of cloud of the Yellow Mountains

Autumn — Chrysanthemum blossoms and red leaves of the Yellow Mountains

Our advice is to avoid Chinese festivals, such as Spring Festival, labor day, National Day, etc. Because there are so many people in the festival.

Huangshan has been named more than 120 strange stone, its various forms. Huangshan rocks from different positions, in different weather to see, it can be said that “horizontal ridge side peak, the distance is different.” There are strange rocks on almost every mountain in huangshan, which formed during the quaternary glacial period more than a million years ago.

Since ancient times, huangshan has been a land of clouds and mist. Its magnificent “sea of clouds” is famous for its beauty, beauty, wonder and illusion. Evian sea distribution azimuth, the mountains have the east China sea, the south China sea, the west sea, the north sea and the sky sea. 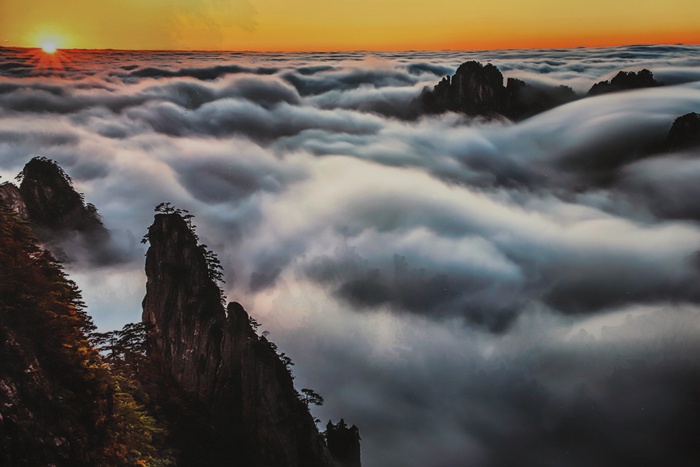 There are clouds and mist in huangshan for more than 200 days a year. When the water and air rise or the fog does not disappear after the rain, the sea of clouds will be formed. Mangrove clouds, patches of red leaves floating above the sea of clouds, is a rare sight of late autumn in huangshan. Beihai double shear peak, when the sea of clouds on both sides of the mountain, from the two peaks flow, pouring down, is another wonderful huangshan.

The hot spring, one of the “five unique” in huangshan, originates from ziyun peak, 850 meters above sea level. It is said that xuanyuan yellow emperor is in this bath 774 19 to rejuvenate the child, feather flying, so it is known as “ling quan”.

Huangshan hot spring gushing out from under ziyun peak is the first stop to enter huangshan through the gate of huangshan. The hot spring produces about 400 tons of water every day. The water temperature is around 42 degrees. Huangshan hot spring has certain effects on digestive, nervous, cardiovascular, metabolic, sports and other diseases, especially skin diseases.

There are 62 days of rime and 35.9 days of rain in huangshan. Huangshan is mostly granular rime, the temperature in -2 to -7℃, it is easy to form when the fog droplets expand to drizzle, can form rime.

The Origin of Huangshan

Huangshan, known as “the capital of the sons of heaven” in ancient times, was the residence of emperors and immortals because of its magnificence and mystery. To the qin dynasty, people called it “yi shan” according to its color. Then, why was it called “huangshan” again later? It is said that the yellow emperor once alchemy here to get the name.

Huang di, also known as xuanyuan, was the leader of the tribal alliance. He led our ancestors to raise silkworms and make boats. Time flies. When the yellow emperor was old, he still had many things to do: rivers needed to be harnessed, land needed to be reclaimed, animals needed to be tamed, and so on. In order to live forever, do good for the people, he found a place called yi mountain, where can alchemy.

It took them nine years of painstaking searching before they collected the herbs needed for alchemy. Three years passed, the original prepared wood is almost burnt, the elixanthus has not been refined, the tree near the alchemical table has been cut down, the yellow emperor alone guard the fire. Huang di put the last piece of wood into the furnace, watching the fire become smaller and smaller, once extinguished, will be wasted. 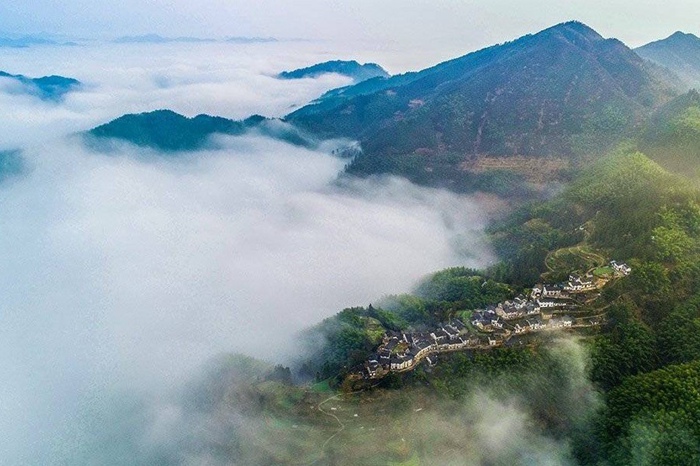 The emperor then put one of his legs into the stove for firewood, and finally made the elixanthus. He ate the elixir and was transformed into a fairy.

Because Yi mountain is the place where the yellow emperor alchemy, people call it “huangshan”. Among the 72 peaks of huangshan, there are Xuanuan, Fuiu and Rongcheng peaks named after three immortals. In the peach blossom stream there are alchemy when they used the well, medicine mortar.

The Differences Between Chinese and Western Marriage Customs
Popular Ginkgo Tree in Guanyin Ancient Temple of Xi'an
Tips on Hot Spring, What Should You Pay Attention to
Museum of the Imperial Palace of Manchukuo in Changchun