Pudacuo National Park in China, It is notable as the first national park in China to meet International Union

Pudacuo National Park, located at an elevation of between 3,500 meters and 4,159 meters, is a provincial nature reserve and an important part of the three parallel rivers scenic area. Pudazuo national park has geological features, lakes and wetlands, forest meadows, river valleys and streams, rare animals and plants, and the original ecological environment is well preserved. The total area is about 1313 square kilometers.

Shangri-La was well known after James Hilton described Shangri-La In his novel Lost Horizon as a mystical land with lofty and continuous snow mountains, endless grasslands, steep and grand gorges, azure lakes and bucolic villages. If you imagine this kind of happy land in Shangri-La, go to Pudacuo National Park.

It is the wonderland and the real Shangri-La in Shangri-La. Pudacuo National Park, at an altitude of 3500m to 4159m, is a 1300-square-kilometer national park in Shangri-La County. It is notable as the first national park in China tours to meet International Union for Conservation of Nature standards. It consists of Bita Lake Nature Reserve and Shudu Lake Scenic Area which are part of the Three Parallel Rivers of Yunnan Protected Areas UNESCO World Heritage Site.

Shudu means the cheese as sturdy as a stone. Shudu Lake is the tectonic lake of geological fault with the highest elevation in Yunnan Province. The ecological system of Shudu Lake is composed of plateau lakes, swamped meadows and primitive dark coniferous forests with copious rare animals and plant resources. In its lake, it has different species of fish with double-lips and golden color. The view around Shudu Lake is a complete perfection. Travelers can see herds of cattle and flocks of sheep grazing leisurely around the lake. The lush forest around the lake makes it mysterious and holy.

Bita Lake, a pearl on the high plateau, is an emerald and glamorous lake surrounded by luxuriant trees and green mountains. There is a beautiful legend about Bita Lake. It is said that Bita Lake is the most gorgeous piece of mirror with an emerald that is broken by a goddess in heaven. That’s why Bita Lake is as blue as emerald. From May till July, the azaleas fall from the trees with the wind, petals float on the water which attracts plenty of fish. Hence, there are special scenes called “Fish Drunk in Azalea” and “Old Bear Catch Fish”.

Militang Grassland is located in the region between Shudu Lake and Bita Lake, 4500 meters in length from south to north and 500 meters in width from east to west, at an elevation of 3700 meters. Militang refers to a long and slim eye-like meadow named after a narrow eye of Buddha. With plenty of water and lush grass in meadow, wetland and meandering brooks, cattle and sheep grazing leisurely, Militang Pasture is enchanting as green satin scattered numerous pearls from spring to summer. An amazing spectacle is the gorgeous meadows with the blooming season last until September which is the most attractive scene in Pudacuo National Park. 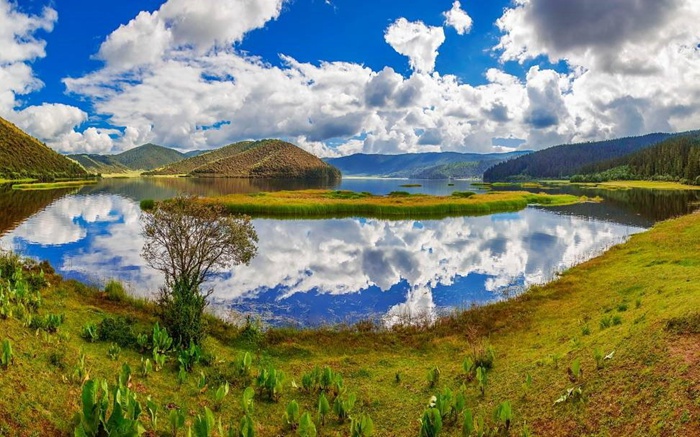