Look up at the sky today and you will find romance in the deep blue. According to the celestial phenomena, the ancient Chinese people created this love story, and the earliest records of this fairy tale date back 2,600 years.

In the eastern part of the galaxy, there is a star called vega, which is said to be zhinv. In the west, there is the constellation Aquila, a cowboy waiting for his wife. Zhinv is the goddess’s youngest daughter. She belongs in heaven and her daily life is to weave the colorful clouds with her sisters. And the cowboy is just a poor boy living a lonely life on earth with an old cow.

One day, zhinv and her sisters decided to have a rest and come to the world to play. She met the cowboy by chance and they fell in love at first sight. When her sisters finished their short journey and decided to return to heaven to continue their work, zhinv decided to give up her immortal life and stay on earth with the cowboys.

Soon they got married and lived a happy life with their two lovely children. However, it was not long before the queen found out about their secret and was annoyed by the couple’s behaviour. The queen sent some soldiers to bring the girl weaver back to haven and make her work as she used to. The cowboy was heartbroken to see his wife fly back to heaven under duress. As for zhinu, she missed her husband so much that her cloud was full of sorrow.

Just then, to his surprise, the old cow began to speak, telling the cowboy to kill him, cover him with his fur, and sneak off to heaven to find his wife. Although he felt very sad, he did as the bull said. He flew up to heaven with his two children, and finally saw his wife, but they were caught by the queen, and angered, and she took off her hairpin, and made a river in the air, to prevent them from meeting forever. The river is thought to be the Milky Way, with vega (vega) on one side and cowboys (Aquila) and their two children on the other.

Finally, the queen relented and allowed them to meet once a year on the seventh day of the seventh lunar month. On this day, all the magpies in the world will fly into the sky and build a bridge to reunite them for a night. In fact, vega and Aquila did meet in the sky on August 4.

Fairy tales are one of the four great Chinese folk tales, the others being the legend of the white snake, lady white, liang shanbo and zhu yingtai. 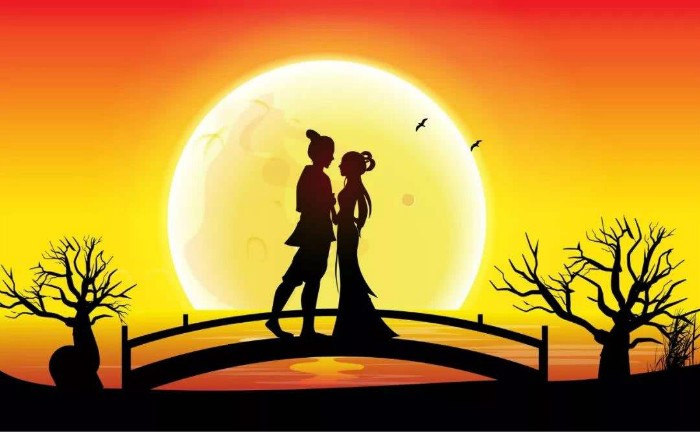