Shadow puppetry, or Shadow Play, was very popular during the Tang and Song dynasties in many parts of China. Shadow puppets were first made of paper sculpture, later from the leather of donkeys or oxen. That’s why their Chinese name is pi ying, which means shadows of leather.

More than 2,000 years ago, a favorite concubine of Wu Emperor of the Han Dynasty died of illness; the emperor missed her so much that he lost his desire to reign. One day, a minister happened to see children playing with dolls where the shadows on the floor were vivid. Inspired by this scene, the smart minister hit upon an idea. He made a cotton puppet of the concubine and painted it. As night fell, he invited the emperor to watch a rear-illuminated puppet show behind a curtain. The emperor was delighted and took to it from then on. This story recorded in the official history book is believed to be the origin of shadow puppetry.

Shadow puppetry is related to politics. In Beijing, for example, during the reign of emperor Kangxi, the folk art was so popular that there were eight generous puppeteers in a prince’s palace. When the manchu rulers extended their rule throughout China, they brought puppet shows to compensate for the fact that Chinese shadow puppetry was unable to appreciate local entertainment due to the language barrier. From 1796 to 1800, the government banned puppet shows to prevent the spread of peasant uprisings. It was not until 1821 that shadow puppetry began to show some signs of life.

Today, like other traditional art forms such as nuo opera, Peking Opera is in danger of dying out.

In order to overcome the limitation of seeing only the side of the puppet, shadow puppets use exaggeration and heavy dramatization. Puppet faces and costumes are vivid and humorous. Luxuriant color, elegant modelling, fluent line, make puppet is prop not only, it is artwork more. One figure requires up to 24 steps and more than 3,000 cuts.

Each of these characters has a large head and a small body, which is tapering down. A man has a big head and a square face, a broad forehead and a tall and strong body, without much masculinity. A woman has a thin face, a small mouth, and a slender body, but not very plump. Mildness and gentleness are the standard of Chinese beauty. Scholars wear robes and are elegant, while generals wear uniforms that remind people of bravery and valor.

The design of these characters follows the traditional moral evaluation and aesthetics. The audience can tell the character of a character by his mask. Just like the mask in Beijing Opera, the red mask represents integrity, the black mask represents loyalty, and the white mask represents betrayal. Positive people have long, narrow eyes, a small mouth and a straight nose, while negative people have small eyes, a prominent forehead and a drooping mouth. The clown has a circle around his eyes that shows a sense of humor and frivolity before he performs anything.

In shadow puppetry, buildings, furniture, utensils, auspicious patterns and other rich background appear. The play is an unpretentious art, which impressed the audience with its vividness and delicacy. A framed puppet can be a new and enjoyable souvenir. 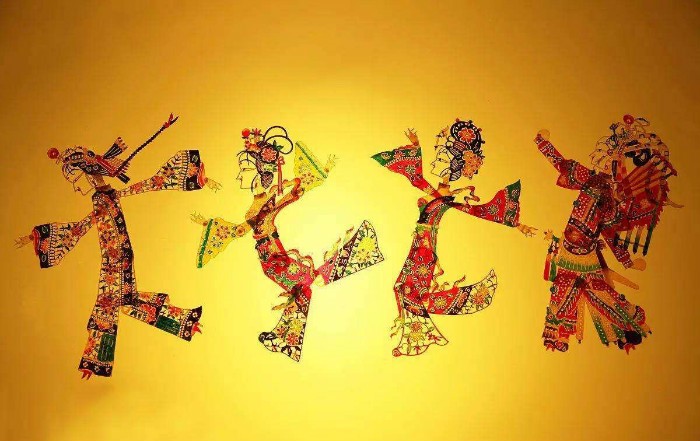