Just as western countries, in China, if you want to visit somebody, you should make an appointment to make sure the time, the place and the number of people. In generally, the place is also determined by the host because china has a proverb: guest follows the host and show respect to host. But long time ago, people don’t make a notice or appointment in China, and if the host is not at home, he even should apologize to the guest. In a formal occasion, you’d better don’t let your children with you, maybe you can leave them at home. And also, the time you choose should be acceptable, and try your best to avoid the rest time or eating time. In America, Britain and other western countries, if you want to visit someone you should explain the purpose the time and the place. And after both sides agree, the appointment can be called successfully. And in most western countries, there are many ways to make an appointment, such as writing a letter, making a call or sending an email. If you don’t make an appointment before you visiting someone, there will lead to two results: 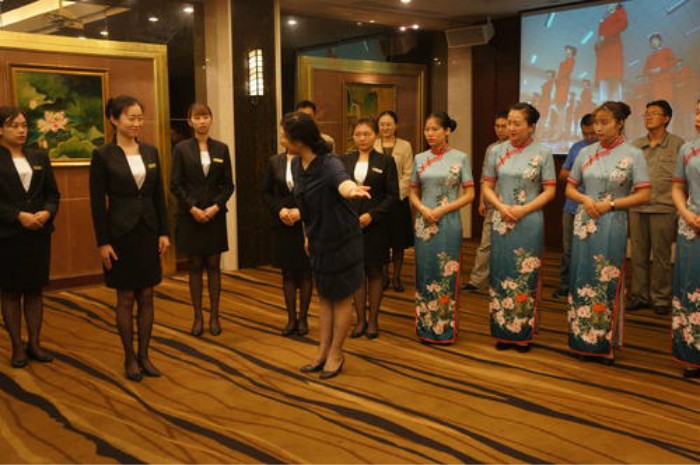 Chinese has the tradition of hospitality and politeness. When the guest comes, whatever he or she is individual guest or not, the whole family will come out and make greeting to the guest. But there is an order, from older to younger. After the guest came home, hosts should find a sit to let the guest sit down, and then offered tea and cigarette. As we all know, drinking tea with guest is china’s traditional custom, but the host also offering all kinds of fruits to the guest. At this time, the guest should say some words to refuse such as “I don’t need it”, “it troubles you too much”. It is quite different in west in terms to welcoming the guest. When the host opens the door, he often says: “hello, glad to see you. Please come in.” When the guest comes in the house, he should take off the coat. At this time, the host should say: “shall I take your coat?” And if you ware a hat, you should take off it when you come in the house. After you sat, the host may ask you what kind of drinks do you want to have, and the guest often tell the host what he really want to have rather than refusing. You shouldn’t smoke if you don’t get the permit ion of the host in Western visit because it makes the host think you are impolite.

When the visiting comes to the end, the guest should make a farewell to the host. According to the British and American’s customs, the guest often says some words to suggest that he want to leave, such as:” I’ve got to be going now.” or “I’m afraid I must be going now.” At that time, the host will say: “can you stay any longer?” or “must you? It’s still early.” When the host persuades the visitor to stay again and again but the visitor insists on leaving, maybe the visitor really wants to leave. In this moment, the host should to see the visitor out. While in China, when the guest says that he must go, he would take actions right now unless the host said “don’t go” again and again. If the guest insists to go, the host can stand up after the guest stands up and persuade the guest to stay longer. If the guest sends you gifts, you should also send some small delicate gifts to him as a reward, and this custom both exists in west and China.