Hukou waterfall is the largest yellow waterfall in the world and the second largest waterfall in China after Huangguoshu waterfall in Guizhou province. It appears in many Chinese paintings and was once printed on the 50-yuan note. The Hukou waterfall is located on the border of Shanxi and Shaanxi provinces and is divided into two parts by the Yellow River. The characteristic spectacle of Hukou waterfall has attracted numerous tourists to appreciate its natural scenery, making it a national key scenic spot, an excellent tourist attraction, a geological relic protection area and an AAAA scenic spot.

Hukou waterfall is one of the most extraordinary waterfalls in the world. Standing on the Yellow River, the thunderous waves, waterfalls roar, as if the Yellow River with its strong momentum roar surging. In fact, in many literary and television works, the magnificent Yellow River has always symbolized the spirit of the unyielding Chinese people.

Originating in qinghai province, the Yellow River runs from east to west, carrying five thousand years of history and civilization across the qinjin gorge on the loess plateau in northwest China. As it flows to the hukou village, the river channel is sharply reduced by only 50 meters wide by 500 meters, a placid river waterfall, gushing into a stone pond more than 30 meters below the original channel, creating the illusion that thousands of wild horses have just been released, rolling forward madly and running madly. As a result, this spectacular waterfall appears. The spout resembles the spout, hence the name “hukou waterfall”.

One of the small caves is on the front left of the hukou waterfall. It is said that once upon a time there was a dragon who would make trouble and cause floods. When the king of yu came to tame the flood and caught the dragon, the dragon fled to the mountains and left the deep cave. The view of the dragon cave is very different from that of the hukou waterfall. Walking down the winding stone steps, you will see a 118-square-metre viewing platform that can accommodate more than 20 visitors and is considered the best place to view the falls. The Yellow River fell down from the sky with a great roar and a hazy mist. The water splashed against the rocks. You can also see a cloud of white smoke coming out of the bottle. 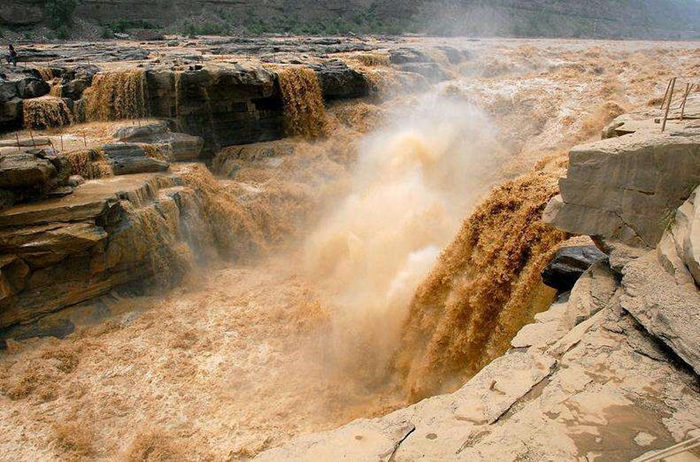 Emeishan Travel Guide
How Large is the “Greater Wuhan”?
Labrang Monastery，A Propitious Place in the Hearts of the Tibetans
Hengshan Road, A Road Full of Exotic Atmosphere