Take the environment as a whole 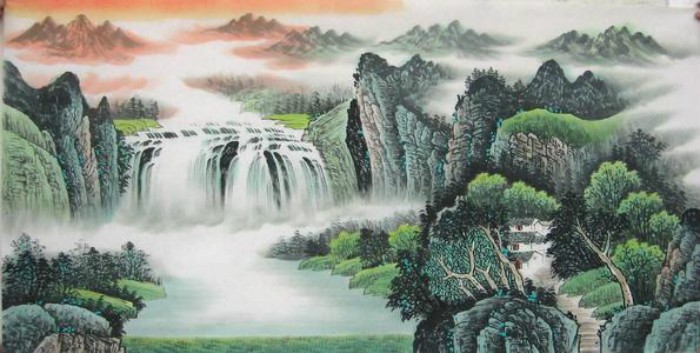 According to feng shui, our environment is a human-centered integrated system that includes heaven, earth and all things. All things in a system are interrelated, and damage to any of them can cause damage to the system. When studying feng shui, everything should be taken into consideration. That’s the ground rule.

Live a life adapted to the surrounding environment, build a house in harmony with the surrounding environment, so that people and architecture and nature to adapt. Mongolian herders, for example, use yurts as houses because they are easy to move. In southern China, villagers use bamboo to build houses because it provides ventilation, keeps the air flowing and carries away water.

Face up to the mountain water

Feng shui masters believe that a house with mountains and rivers on its back is auspicious and can bring good luck to those who live in it. Many ancient buildings were built at the foot of the mountain, close to the water, such as the mausoleum of the first emperor of qin and the Confucius mansion. There are two styles of “mountain slopes” : one is the mountains surrounding the house. That is, the house is surrounded by mountains to the north, west, and east, while to the south is open land where water flows. Another is a house covered with mountains. That is to say, from the foot of the mountain to the side of the mountain, the hillside is covered with a large number of houses. Many villages in the middle and lower reaches of the Yangtze river are built in the form of “mountain houses”.

To observe the terrain

When exploring a place, it is important to know the terrain, especially the source and direction of the surrounding mountains and rivers, to avoid possible natural disasters.

The research of geological

Most of China lies north of the tropic of cancer. In winter, houses facing south absorb the sun easily and avoid the cold north wind. It’s good for people’s health.

The size of the house must be moderate, neither too big nor too small. Small houses with too many people are not recommended; It’s not just a big house for a few people. In addition, feng shui has strict requirements for the correct positioning of the central axis of the building. In general, the central axis should run from north to south, with its north end pointing directly to a mountain range running from east to west. The mountain is regarded as the guardian of the city. The river winding around the city is considered a symbol of good fortune. The Forbidden City was built in strict accordance with these rules.

In feng shui, “qi” is the general term for energy, whether in or around a person, building, tree or any other object. It is the origin of all things. Cities and houses should be built where energy is abundant. In this way, plants can grow in large Numbers and people can live longer and healthier lives. Although we don’t know what kind of energy it is, there are some symbols that tell us what kind of energy it is: lush plants, clear and sweet water, fertile soil, smooth stones. A feng shui compass is used by its owner to find the energy of chi.

In this way, people can turn bad feng shui into good. The moat around the Forbidden City was dug up by hand, and the mountain behind it was dug up by hand. Another successful example is the dujiangyan water conservancy project, which protected the chengdu plain from flooding.