Reed Flute Cave – the Palace of Natural Art, Stalactites continue to grow as long as there are water droplets

Walk into the cave of the reed flute and you will be amazed at how brilliant these glittering stalagmites are.

Colorful lights and a wide range of natural scenery constitute a fantasy wonderland. The underground lake flows quietly along the cave, and the reflection of the cave covers the river and flows quietly along the stream, making it more vivid and dynamic. The interior of reed cave is a sight that can’t be recreated anywhere on earth. These unique caves have names that match their appearance and are said to resemble mythical creatures or modern structures like the statue of liberty.

When you come out of the cave, you will find a lot of reeds growing outside the mysterious cave. They can be used to make flutes. That is the name of the cave. Close your eyes and imagine yourself standing in the mist of reeds, breathing the fresh air and listening to the flute. Outside the cave is a perfectly quiet retreat where the Chinese “Thoreau” might have lived.

There are all kinds of stalagmites, stalactites, stone pillars, stone flags, which were formed 180 million years ago. They are shaped by nature, either grotesque or vivid. These “mountains,” “tree trunks,” and “animals” are stalactites that drip continuously from the roof of the cave. Water containing calcium ions dripped from the cracks and crystallized into stalactites over millions of years, suspended at the top of the cave. Water drips down on the ground to form stalagmites, which gradually form stone pillars from the bottom up. As an old Chinese saying goes, “constant dropping of water wears away stones.” In the reed flute rock, on the contrary, the muddy water forms the stone. Stalactites continue to grow as long as there are water droplets.

It is home to a vast collection of stalactites, pillars and rock formations formed by carbonate deposits, many of which have been likened to recognizable shapes in mythological creatures and natural images. For example, there is a stone circle shaped like the statue of liberty, each stone given a poetic name by the local Chinese. 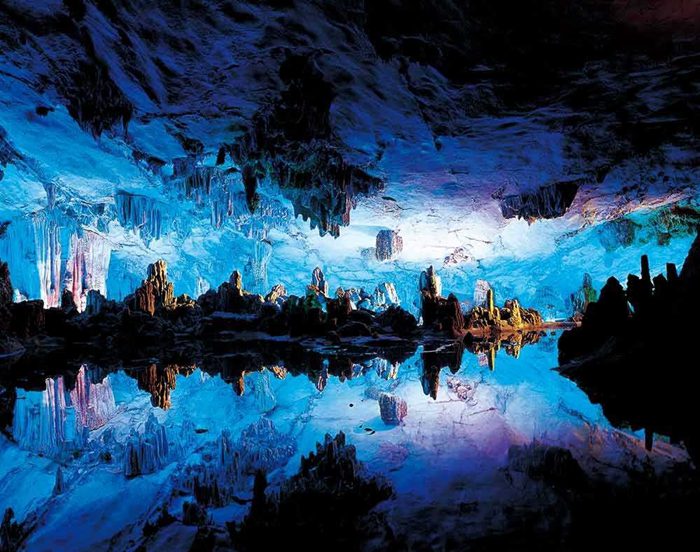