The Ruins of St. Paul’s stands adjacent to the famous Mount Fortress and Macau Museum. The front façade and the grand stone stairs are the only remains of the greatest church. 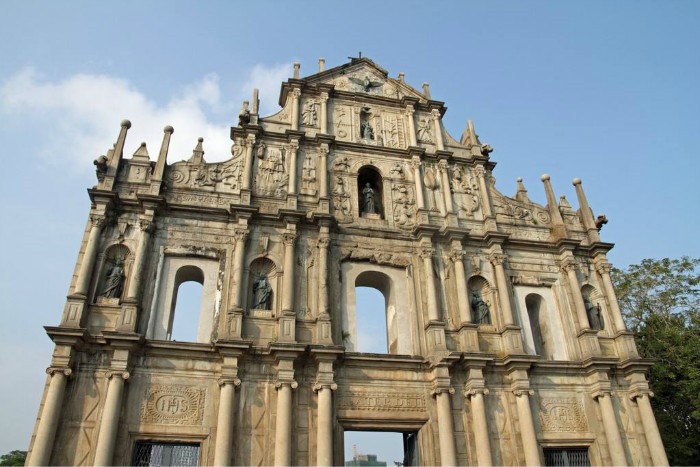 St Paul’s was first built in 1580, then burned down in 1595 and 1601. However, reconstruction began shortly after the church was burned down in 1602. Built in 1637, it became the largest Catholic church in east Asia. Unfortunately, a violent typhoon hit macau in 1835 and the church caught fire for the third time, making its glory a thing of the past. According to historical records, st. Paul’s church was built of white stone with a large arched roof. It has three ornate halls.

St Paul’s cathedral is made of granite, and its baroque facade is richly decorated, but it has a classical Oriental character. From the bottom up, the structure has five floors. The first layer consists of 10 ion columns and 3 entrances. The middle entrance is engraved with the virgin Mary. The two entrances on either side are decorated with bas-reliefs with the motif “his”. On the second floor are ten Corinthian columns with three Windows. A Catholic saint is enshrined in a tent between four pillars. These two layers as a whole are said to represent the social and missionary activities of Jesus.

The remaining three layers are the most decorated. The Madonna stands in the middle of the third tier, and Jesus stands in the middle of the fourth tier. The walls are covered with reliefs of various motifs, such as demons, angels, symbols of suffering, Portuguese sailboats, etc. The triangular combination of the three upper layers reflects the holy trinity (father, son and holy spirit) and the virgin Mary. A cross stands at the top of the wall.

It is worth mentioning that the stone lions on both sides of the third and fourth floors of the ruins of st. Paul’s cathedral have distinct Chinese characteristics. There are also reliefs with chrysanthemums and cherries, and Chinese inscriptions. The existing facade has long been considered a perfect blend of eastern and western cultures.

The ruins of st Paul’s cathedral were restored between 1990 and 1995. The sacred art museum and basement were also built at that time. There is an exhibition of religious art, including paintings, sculptures and statues.