Norbulingka, the Treasure Park in Tibet

Norbulingka, which means “treasure park” in Tibetan, is located on the western outskirts of Lhasa on the Banks of the jiuqu river, about 1 km (0.6 miles) southwest of the potala palace. The garden covers 360,000 square meters (about 430,000 square yards) and has 374 rooms. It is the largest man-made garden in Tibet autonomous region. 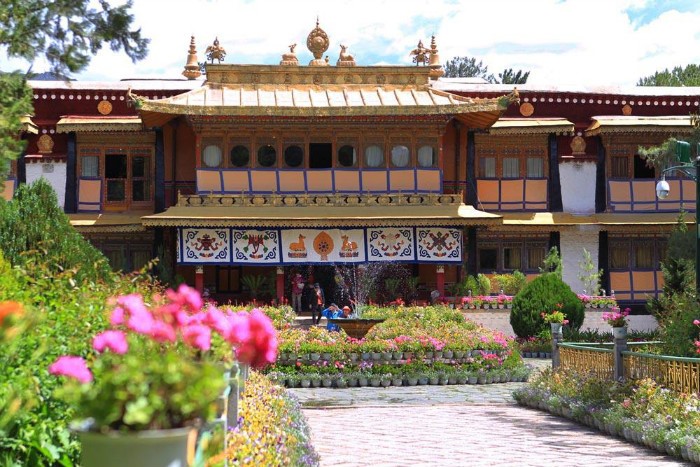 Construction began in the 1740s. It was once a wild land full of wild animals, overgrown with weeds, and overgrown with weeds. It was the favorite and frequent haunt of the seventh dalai lama, for which the qing government built a palace. A few years later, the port was built on the orders of the seventh dalai lama. Later, it was used as the old Summer Palace for successive lamas, where they solved political problems and held festivals. After a series of extensions and renovations, the exterior has been improved with pavilions, gardens and woods. Now it has become a park open to the public.

The potala palace, named after the seventh dalai lama, is a three-story palace with a hall, bedroom, reading room and sanctuary dedicated to the Buddha. In norbulingka, he was considered the most attractive when the eighth dalai lama came to power. The hall built during the han and Tibetan dynasties is where the dalai lama enjoyed Tibetan opera. In 1922, a wealthy donor built the golden Linka and Chensel Potrang for the 13th dalai lama. At the same time, many flowers, grass and trees were planted. In 1954, the 14th dalai lama built the potala palace, also known as the new Summer Palace, which means “eternal palace” in Tibetan. The building combines the characteristics of the temple and the villa, which is more spectacular than other palaces. The exquisite murals in the palace are worth mentioning and visiting. The frescoes in the north hall show the gentle, calm sakyamuni and his eight contemplative disciples. However, the murals in the south temple vividly tell the story of Tibet’s development in the form of comic strips.