West Lake – The Most Popular Place in Hangzhou, has a total area of 49 square kilometers

Listed as a World Heritage Site in 2011 by UNESCO (China’s World Heritage Site Lists), West Lake is the only lake heritage site in China. UNESCO describes it as “has influenced garden design in the rest of China as well as Japan and Korea over the centuries” and “reflecting an idealized fusion between humans and nature”. The scenery of West Lake has always been praised by numerous Chinese poets and artists since ancient time for the perfection combination of stunning natural scenery and human culture.

Leifeng pagoda, also known as Huangfei pagoda, is located on the south bank of the west lake on the Xizhao mountain. The Leifeng pagoda was first built in 977 by Qian Hongchu, king of Zhongyi of the state of Wu, to worship the Buddha’s hair. When the pagoda was formed, it was named “Huangfei(imperial concubine)” by sun, wife of Qian Hongchu, who died shortly after the northern song dynasty. Later, because of its mountain called “Lei Feng”, and gradually known as “Leifeng pagoda”.

It’s famous for suppressing the White Lady – the heroine of Chinese folk love story “Legend of the White Snake”. The sunset glow on the pagoda is extremely beautiful here. 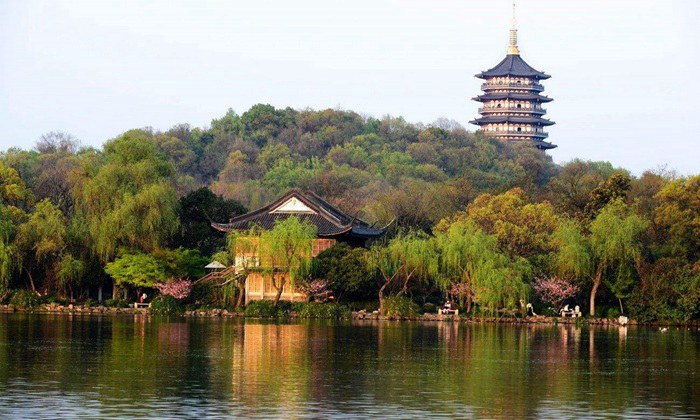 The snow scene of the west lake is enjoyed very high praise by people, especially the view of “malting snow at broken bridge”. Why it is called as “malting snow on the broken bridge”, there are different sayings. One of them is that it snows almost every winter in Hangzhou and when the sun comes out after snowfall, the snow on the sunny side of the bridge melts first, while the snow on the shady side still lingers. Looked at a distance or from a nearby hill, the bridge appears to be broken. It is a favorite stopover for you. Especially on fine winter days after a snow, you may stand on the bridge to feast your eyes on the snow scene far and near. Distant hills, clad in white, grow more enchanting. The famous Chinese folk story “The Tale of White Snake” brings the broken bridge some romance. 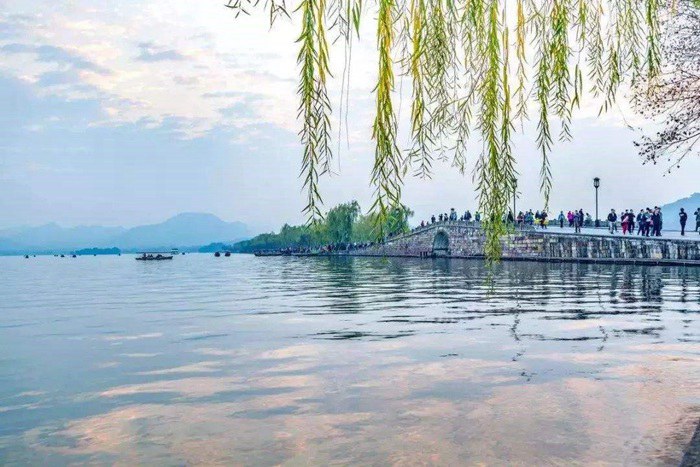 Su Causeway became a tourist attraction as early as 1090 when Su Dongpo, a celebrated Chinese man of letters, supervised the dredging of the lake as the garrison commander of Hangzhou. He had the West Lake dredged and the mud scooped up for this purpose piled up to form a 2.8-kilometres-long causeway, with grass and peach and willow trees planted along its entire length, and six bridges built on the causeway. The causeway has thus become the centerpiece of dainty scenery. On the morning of a spring day, the place looks exceptionally beautiful. 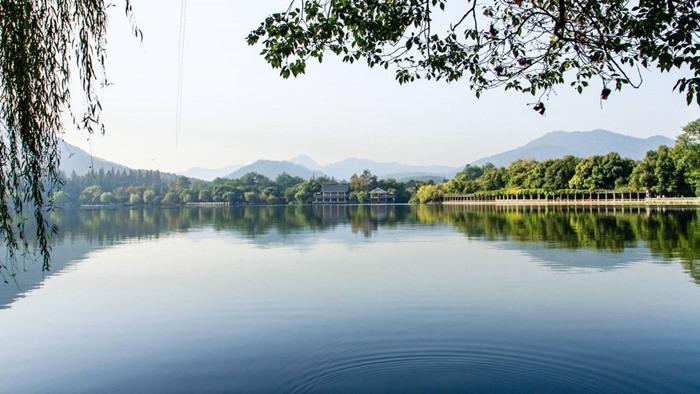 This sight ‘Three Pools Mirroring the Moon’ is on an isle called Xiaoyingzhou (Isle of the Fairies), the biggest in Outer West Lake.

In the lake in the southern section of the isle are three stone pagodas built in 1621, during the Ming Dynasty. Each of these hollow structures has five equally distanced holes in it. Standing at the center of the dock off the Pavilion of My Affinity, one can get a glimpse of the lake water through two seemingly overlapping holes in the three pagodas. The sight is particularly captivating on a moonlit night when ‘a full moon produces three reflections on the lake’. Hence the name of the place, which is most frequented by those who want to best enjoy a moonlit scene. 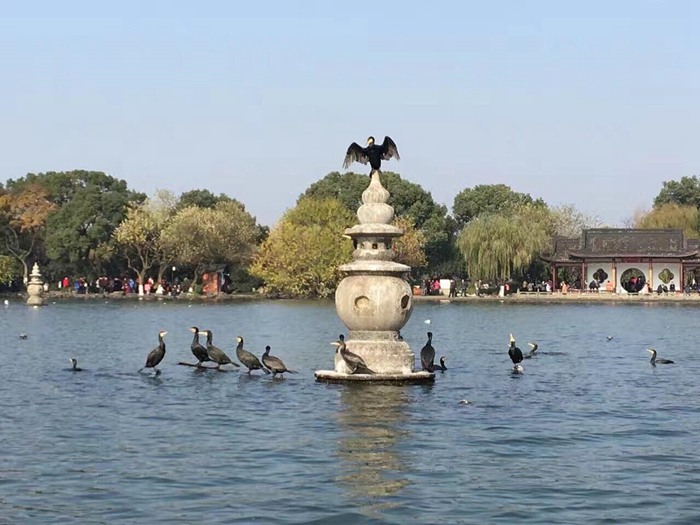 Ten Scenes of West Lake refer to ten characteristic sceneries in the West Lake scenic spot. Formed at Southern Song Dynasty (A.D. 1127 – 1279), most of the ten scenes are distributed around the lake, and some of them are on the lake. There are Spring Dawn at Su Causeway, Lotus in the Breeze at Crooked Courtyard, Autumn Moon over the Calm Lake, Melting Snow at Broken Bridge, Orioles singing in the willows, Viewing Fish at flower harbor, Sunset glow at Leifeng pagoda, Twin peaks piercing Clouds, Evening bell at Nanping hill, Three pools mirroring the moon.

Every season of the West Lake has a different unique beauty.

At this time the west lake is very warm but not hot, very comfortable. The ground is covered in light green, interspersed with colorful flowers. Spring in hangzhou is very short, about 60 days, so march and April are the peak months for tourism, which can be crowded

Hangzhou is very hot in summer, but the west lake is very cool. For those looking for a quiet place to escape the heat, visiting an ancient temple or the bamboo forests around the west lake is an absolutely delightful experience.

Autumn is the season when chrysanthemums and osmanthus flowers bloom. Order a cup of longjing tea, smell the fragrance of osmanthus flowers, take a look at the autumn leaves and find a quiet time here. Besides, autumn is the best time to see the full moon, especially during the Mid-Autumn festival. The full moon hanging over the tranquil lake is a great place to experience this traditional Chinese festival.

It rarely snows in hangzhou, but once winter snow falls on the west lake. That’s a great experience not to be missed. Snowy days are always the carnival days for the whole city and the locals will flush into the West Lake, just to see the gorgeous and tranquil snowy scene. 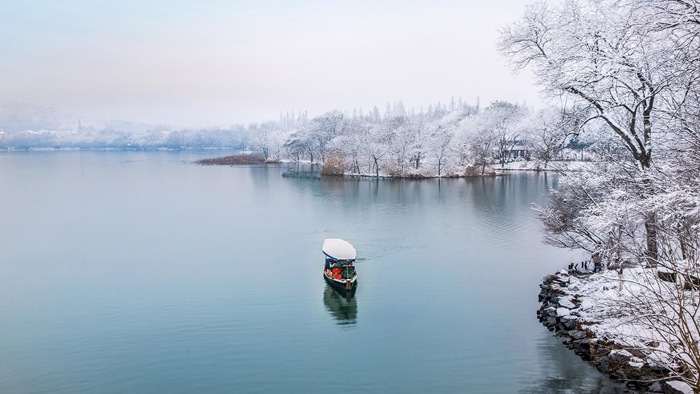 The Tips for Photography

Where to take the panorama

From the top of leifeng pagoda, you can photograph the southern part of sudi and the three islets in the lake. Instead of a tripod, you can place the camera on the arm rest of the pagoda.

China's Consumer Demand for Tourism Is Rising Day by Day
Top 10 most beautiful water towns in China
Mount Everest, the Highest Peak in the World
What Numbers Do Chinese Dislike, Unlucky Numbers in China