Giant Pandas Behavior — What Do Pandas Do All Day

A giant panda needs between 12 and 38 kilograms of food a day, about 40 percent of its body weight.Pandas like to eat bamboo’s tender stems, shoots and leaves, which are rich in nutrients and low in fiber.Pandas eat golden bamboo. They eat the best food every season. The best part of April is the woods. Other times, they eat for tips and relax on the wood.Wild pandas eat grass, wild fruit, insects, mice and even lambs from surrounding villages and leftovers from rubbish dumps.

Except for about half a day’s food, the pandas spend the rest of the day sleeping. In the wild, giant pandas sleep two to four hours between meals, and their favorite sleeping positions include lying on their back, side, stomach, stretching their PAWS and curling up.

In the zoo, the keepers feed the pandas regularly twice a day, so the pandas rest most of their spare time. Even when they sleep, they look very cute.

Pandas strike a variety of poses with their seemingly awkward bodies. Their favorite sleeping position is to put their back PAWS on a tree, their front PAWS covering their eyes.

The pandas are very nimble in climbing trees and run rapidly in danger.They propose to their partners, run away from danger and evade stronger competitors by climbing trees.

The giant pandas also walk into the valley, sneak into mountain villages or residences, which play with round-shaped utensils as toys and later abandon them in the wild.Once in a while, the giant pandas also show their kindness to sheep and pigs by sharing food and rooms with them.

Due to their low energy diet, they avoid stressful situations and efforts, preferring shoals and solitary life. They use scent markers to avoid each other. Instead of growling like other bears, pandas bleat like goats, or communicate by honking, growling and barking. The cubs whined for attention.

Panda families don’t live together. They are solitary, and each female has a defined range.

Except during the brief breeding season (march to may), males usually live apart as they compete for the attention of females. The mother bear raises her cubs alone.

The giant panda is solitary and likes the freedom of solitude, sleeping during the day and foraging at night. 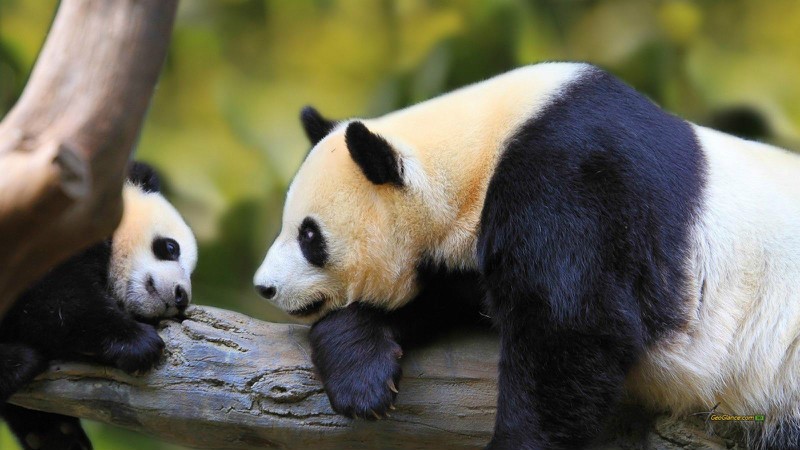