Wudang Martial Arts were created in the early years of the Ming Dynasty (1368 – 1644) by a Taoist named Zhang Sanfeng. It combines the essence of the Book of Changes and the Tao Teh King (Daodejing) of Laozi (an ancient well-known philosopher). Originated in Mt. Wudang, a Taoist holy land, it is of great value to fitness and body-building. By now, it has become popular in China and worldwide, as a kind of fitness sport.

Together with the Shaolin School in the north, Wudang School in the south is the most typical representative of traditional Chinese Kung Fu. At present, its major skills are well presented by Tai Chi (Taiji), (Xingyiquan and Baguazhang.

Wudang Martial Arts were created based on the Taoist ideology. Taoism holds that there are basic, everlasting and supernatural principles in the earth which are called “Tao” suggesting softness, quietness, emptiness, unification, fairness and harmony. All these can be presented according to Tai Chi, Yin and Yang, the Five Elements (water, gold, fire, wood and earth) and the Eight Diagrams tactics. Under the direction of these philosophical theories, this Kung Fu style gains good effects in the boxing and sword skills.

Wudang Boxing, a kind of Internal Boxing Art (Neijiaquan), observes the ideas in the Book of Changes and takes the changes of Yin and Yang as presuppositions. The Eight-Diagram Palm, also named Circuit Palm, presents the self-defence skills by the practice of moving in a circle. The learners cultivate the skills by circuit walking, which seems to move along the lines of the Eight Diagrams, an important Taoist characteristic. Sometimes, the walking trace looks like the inner or external profile of the Eight-Diagram tactics. This special skill takes advantages of the palm strength to give full play to the strength of the hand.

Although the Taoist theurgy and alchemy are full of mystery, the basic principles are to mintian fitness. Wudang Kung Fu includes many boxing styles and weapon skills which are all created to adapt to the human body. Practising these skills is beneficial to the stimulation of blood circulation. It relaxes muscles and joints, nourishes the physical organs and cultivates physical and mental health.Tai Chi is the best example of its fitness function. The practice pace of Tai Chi is slow. It functions to defeat the strong in a weak way and beat the moving in a standstill manner. Qigong used in Tai Chi cannot only practise the Kungfu skills, but also develop wisdom and strengthen the body. The Taiji Sword is an important part of Tai Chi concerning the characteristics of Tai Chi and swordplay. On the one hand, its motions need to be agile and soft emphasizing the fitness spirit as Tai Chi; on the other hand, it has to be elegant and flexible showing the vivid manner of sword playing. 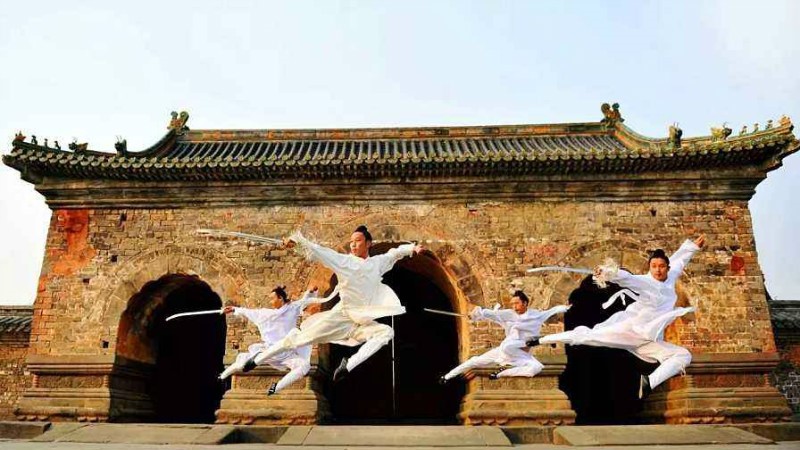