Wulong county, located in the southeast of chongqing city and 139 kilometers from the city center, is a karst landscape in southern China. The county is 82.7 kilometers from east to west and 75 kilometers from north to south, covering an area of 2,901.5 square kilometers. Wulong is best known to Chinese tourists for “curse of the golden flower,” a famous film directed by famous Chinese director zhang yimou. In 2014, transformers: age of extinction was attracted by the natural scenery of the small county, and more and more people were attracted by the gorgeous karst scenery of wulong.

The main attractions of wulong are the natural scenery, many of which have been listed as world natural heritage sites. Here are four of the most popular attractions: the three natural Bridges to the wonder of the world, the magical furong cave, the immortal mountains in the vast grassland and the magnificent longshui gorge. Wulong is the kind of place where you are struck by the wonder of nature.

Located in the southeast of wulong county, 20 kilometers from wulong county, is the largest natural bridge group in Asia. Featuring a classic karst landscape, the magnificent landscape is alive with trees growing directly from the stones, and the water even flowing on top of the bridge, dripping and shining like pearls. The three natural Bridges, consisting of tianlong bridge, qinglong bridge and heilongjiang bridge, are natural Bridges connecting the mountains on both sides across the yangshuihe gorge from north to south. Under the bridge there are naturally formed pit, so called tiankeng three bridge.

Tianlong bridge is the first bridge 235 meters high and 150 meters thick. It is also known as the tiankeng no.1 bridge. The most unique part of tianlong bridge is its piers, which have labyrinthine caves. The main cave is 400 meters long, and there are all kinds of passageways leading to all kinds of strange caves. 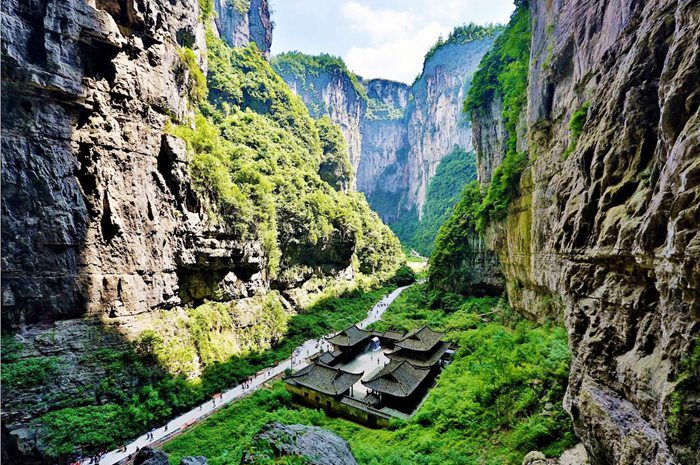 The Relationship Between the Chinese Emperor and the Dragon
Yu Garden, An Classic Chinese Garden, Yu Garden is the only fully restored classical Chinese garden ...
Lingering Garden - Most Poetic Garden in China
Major 10 Principles of Fengshui