Yuexiu park, located in yuexiu district, guangzhou, is the largest park in guangzhou. Covering an area of 860,000 square meters (212.5 mu), it consists of three artificial lakes and seven mountains of yuexiu mountain. Hence the name. 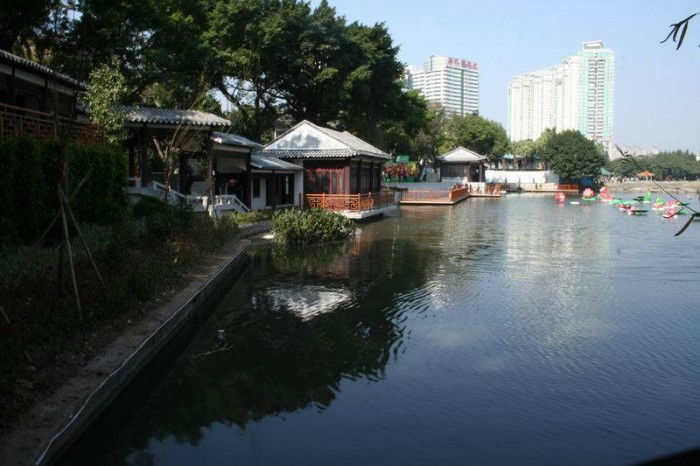 It is a perfect combination of cultural relics and ecotourism, famous for its beautiful water and mountains as well as cultural relics. The main scenic spots and historical sites are wuyang stone carving, zhenhai tower, Ming city wall ruins and fang pao ruins.

The wuyang sculpture in yuexiu park is one of the most famous buildings in guangzhou. It has become the symbol of the city. It is said that more than two thousand years ago, the city was a barren land and people suffered from famine despite their hard work. One day, five immortals dressed in five colors arrived on five RAMS, and they played legendary music. The ram holds bundles of rice in its mouth. The gods left bundles of rice for the locals, blessed the city and left. The ram turned to stone, and the city became a rich and populous place. Guangzhou has the names of “Yang city” and “sui city”.

One of the city’s landmarks is the zhenhai tower, known locally as the five-story tower. There is an interesting historical record that zhu liangzu, marquis of yongjia in the Ming dynasty (1368-1644), saw the yellow and purple air rising from yuesiu mountain and was told by a sorcerer that it was a sign of a new emperor. To overcome this omen, zhu liangzu ordered the construction of the tower in 1380. Over the past 600 years, the tower has been destroyed five times and rebuilt five times. It is now the guangzhou museum, which houses more than 2,000 years of historical relics and documents of guangzhou. The current zhenhai tower is 28 meters (91.9 feet) high and 16 meters (52.5 feet) wide, and is known as the first lingnan tower. The contrast between the green glazed title and the red walls gives the tower an elegant look.

Dunhuang Dishes, What to Eat in Dunhuang
The first performance of "Sitting in Sanjiang" banquet
Yellow River, the Mother River in China
Shanghai World Financial Center, the Second Tallest Skyscraper in Shanghai