Impression Liu Sanjie is the first “landscape live performance” in China. Impression of Liu Sanjie premiered on March 20, 2004 at the song festival of Liu Sanjie, a mile from West Street. This is the world’s largest nature theater, with Lijiang River water as the stage and 12 misty mountains and sky as the background. Fog, rain, moonlight, mountains and their reflections on the river all become the ever-changing natural background. Its auditorium is located on the natural island of the river. The audience stands on the designed terrace, surrounded by green plants. The sound equipment here is invisible because it’s in harmony with nature.

Valleys, hills, cool winds and gurgling streams are all factors that produce three-dimensional sound effects. Day by day, different weather provides different scenery, four distinct seasons, refreshing and impressive, Liu Sanjie will have a unique experience every time. This is really a new concept opera with nature as the performing subject, so it is named “a masterpiece of cooperation between man and God”. 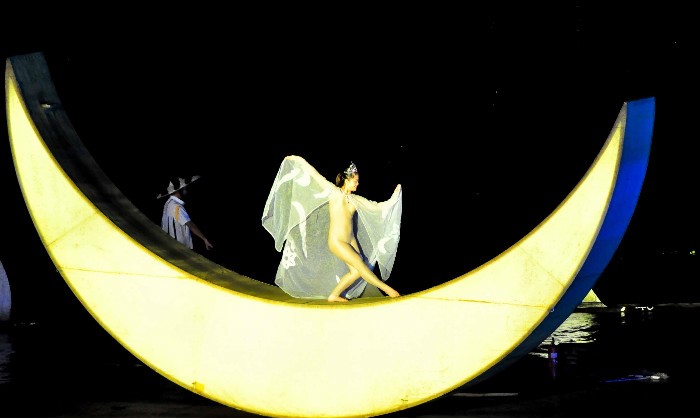 Maybe you’ve heard of the 1961 movie “Liu Sanjie”, which made Lijiang famous all over the world. Liu Sanjie is a fairy singer in Zhuang mythology. She is incomparably beautiful and has a voice to match her beauty. In Liu Sanjie’s impression, you can see the impression of people living by the Lijiang River, not the specific details of the story. From these impressions, you will have a real impression of the background of Sanjie’s birthplace and understand the beauty of the hometown of folk songs.The story of Liu Sanjie in folklore is a complicated and divergent discourse. There are not only conflicts between different values of the same class of people, but also conflicts between different social classes; there are not only portraits of real life, but also romantic fantasies, ghosts and witches. Due to the spread and evolution of the legend in different historical periods, different cities and different nationalities, the story has accumulated layers, been related to each other and contradicted with each other. But anyway, Liu Sanjie in the folklore contains Folk Ethics, folk wisdom, folk imagination and folk interest, which are the most charming and dynamic places in Liu Sanjie’s folklore.

Rishengchang Former Bank, One of the Earliest Exchange Shops in China
Shanghai Disney Resort
Window of the World Shenzhen, most popular tourist attractions in Shenzhen
History of Lijiang Old Town