Speaking of long Chinese history, religious culture and distinctive natural scenery, the Five Great Mountains are the best destinations to discovery once for all.

Owning to their varied figures, unique natural environment and religious significance, they have attracted people from all over the world.. Despite the lower height than those high mountains like Mount Emei and Mount Wutai, the five in different directions are known far and wide as the great figure of Chinese nation, through the combination of worshipping tradition of ancient mount gods, theory of five Taoist elements (Gold, Wood, Water, Fire and Soil) and mountain apotheosis from emperors. As the popular saying goes, trips to China’s five great mountains belittle trips to other mountains unnecessaryMoreover, the starring five famous mountains in China are still major ashram of Chinese Taoism, where each own typical characteristics with both scenic and cultural significance.

The most famous and frequently visited of all the mountains in China is Mount Tai(泰山Tàishān). Mount Tai is acknowledged as the head of the five sacred mountains and is located in the center of Shandong Province representing the East in accordance with the five cardinal directions of Chinese geomancy. Covering 426 square kilometers (164 square miles) with an elevation of 1,532 meters (5,029 feet) at its highest point, the Jade Emperor Peak, the mountain is undeniably enormous.

It is home to 22 different temples like the renowned Jade Emperor Temple (玉皇庙) and the Azure Cloud Temple (碧霞祠), 1,018 cliff-side stone carvings and inscriptions, 97 ancient ruins, and numerous villages, thus making it eligible to become a UNESCO World Heritage Site in 1987. Visitors can choose to climb the 6,293 Official Mountain Walkway Steps to some of the highest areas of the mountain or conveniently take a bus to the “Midway Gate to Heaven” where they can complete the journey riding a cable car to Mount Tai’s breath-taking summit. In either case, the effort will be rewarding as the view from the most beloved mountain in China is sure make memories of a lifetime. https://www.chinaexpeditiontours.com/china-tours/ 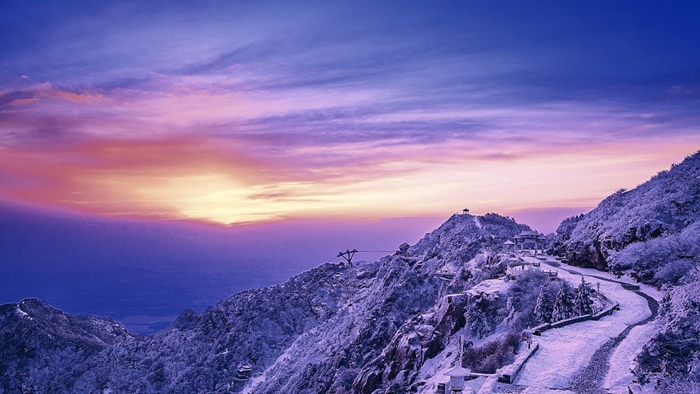 The next sacred mountain is Mount Hua(华山Huàshān), representing the West, which stands 120 kilometers outside of the ancient capital of Xi’an in China’s Northwestern Shaanxi Province. At 2,160 meters high (7,087 feet), Mount Hua is the tallest of the group and is characterized by its sheer cliffs and towering peaks earning it the reputation as the “most precipitous mountain under heaven”. However, the stunning fived-peaked mountain is not only cherished as a geological marvel, but also as a significant holy site with well over a millennia of history.

Mount Hua is the historical location of some of China’s most prominent Daoist monasteries where monks specialized in traditional martial arts, medicine, and internal alchemy in relative secrecy until the twenty first century. Given the uniqueness of the modern day tourist site, visitors may now pick from a large selection of sights and activities to see and do. Highlights include viewing some of the amazing natural features of the mountain such as the Green Dragon Ridge and Cloud Terrace; visiting the temples and shrines where you can purchase a golden lock and attach it to a mountain railing as a family prayer; participating in thrilling outdoors activities like hiking, camping, and attempting to walk the cliff face paths like the monks of the past but with a safety harness; or just taking a cable car to the top where you can enjoy a bowl of Biang Biang Mian, or local specialty noodles, in view of all that lies before Mount Hua.

Mount Heng(衡山Héngshān), which is actually a 150 kilometer (93 miles) long mountain range starting in Hengyan City, Hunan Province, is the Southern Great Mountain. The scenic 72-peaked range is considered the most beautiful of the sacred mountains and is ranked as one of the best year round travel destinations in all of China. Along with its prized status as an area of religious significance, Mount Heng also boasts an array of other distinctions such as being labeled a National Scenic Spot and Historical site and AAAAA Tourist Destination. Indeed, the mountain’s abundance of native flora and fauna is astounding with over 1,200 different species of plants, 150 precious trees, and 9 primitive forests found throughout its ridges and hills. It has even been said that at least nine emperors throughout history have gone to Mount Heng to relax amongst its peaceful temples and picturesque scenery. Now visitors of all walks of life are welcome to tour the mountain’s natural and manmade wonders: Wishing Harmony Peak, the highest rising to 1,300 meters (about 4,266 feet) above sea level); Water Curtain Cave; Wishing Harmony Palace, a Ming Dynasty (1368-1644 A.D.) structure; and the Grand Temple of Mount Heng which represents China’s three major religions (Daoism, Buddhism, and Confucianism) together. 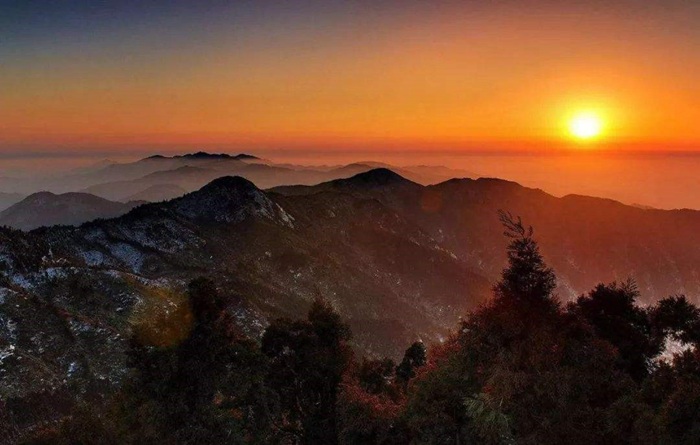 Not to be confused with Hunan Province’s Southern Mount Heng (衡山) with the same pronunciation, Mount Heng(恒山Héngshān) of Shanxi Province, distinguished by a different meaning and character, is the fourth Sacred Mountain and represents the North. Like the others, Mount Heng can trace its historical roots back to the Zhou Dynasty (1046-256 BCE.) or earlier, although it is probably the least religiously significant as a direct result of its location. Shanxi Province is in northern China and its extreme climate has made it difficult for pilgrims to visit the remote mountain in large numbers until the modern age. On the other hand, while these circumstances may have very well hindered the mountain’s placing in popular Chinese culture, they perhaps aided the preservation of its various temples and religious communities. Visitors now have the opportunity to visit the Daoist temple called the Shrine of the Northern Peak that was built in honor of a folk mountain god. Built during the Han Dynasty (206 BCE-220 CE), it has impressively experienced continuous usage until the present day. Another temple said to be worth seeing is interestingly enough a Buddhist temple called the Buddhist Hanging Monastery. The archaic wooden structure is a tour favorite as it is miraculously situated on one of Mount Heng’s perilous cliff-faces making it a true sight to be seen. 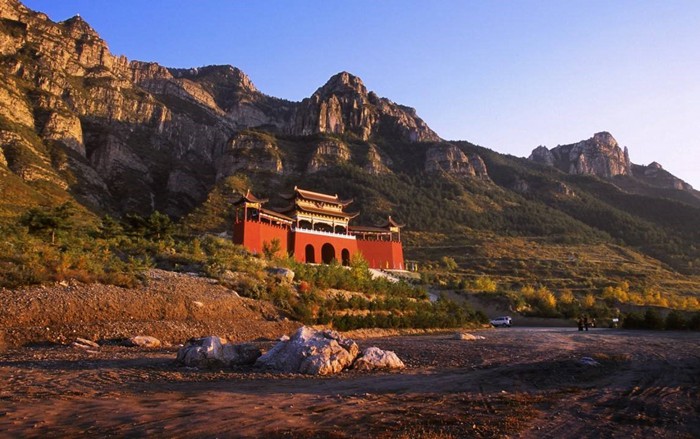 The final Daoist mountain is Henan Province’s Mount Song(嵩山Sōngshān) which represents the center, or the fifth cardinal direction. Mount Song has an elevation of 1,500 meters (4,921 feet) and is comprised of 36 tree-covered peaks spread over a distance of 60 kilometers (about 37 miles) from east to west. The mountain is undoubtedly a spiritual center and is home to a multitude of established monasteries, shrines, and academic institutions with a sizable population even by todays standards. The Central Mountains Zhongyue Temple, one of the first established Daoist temples in the history of China, is considered an historical and cultural relic and is still frequented annually by pilgrims and tourists alike. However, it is its Buddhist neighbor, the world famous Shaolin Temple, which commands the most attention. Thought to be the birthplace of Zen Buddhism, the Shaolin Temple is renowned for its monks strict discipline and martial prowess. It also contains the countrys largest collection of stupas. Additionally, there is a nationally recognized school of Confucian studies at the foot of Mount Song in the ancient city of Dengfeng called the Confucius Songyang Academy. 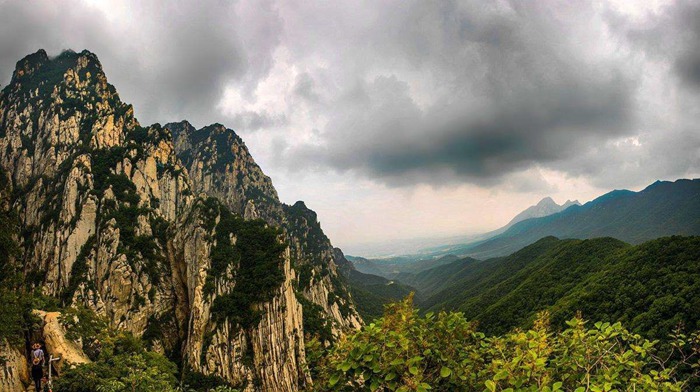