I Came to Zhouzhuang Again, with a Relaxed Mood

Water is the cradle of Zhouzhuang and the lifeblood of Zhouzhuang. The ever-growing water nurtures and nourishes everything in Zhouzhuang. On the land of 0.47 square kilometers, most families live and sleep by the water. Morning dusk, the ancient town in the dawn light singing. The stone Bridges are united, the brick carvings are decorated, the residential houses are passable by the river port, the streets are criss-crossing, the ancient town is Zhouzhuang, alive and fragrant, and retains the appearance like this. 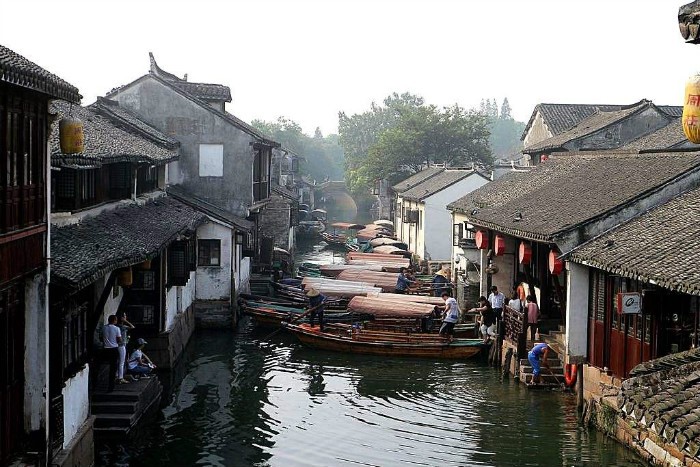 For a photographer, there is no morning to be missed, not even in the drizzly winter. People say Zhouzhuang is too commercial because they haven’t walked into it in the morning. Early in the morning, it is a truly full of life in the south of the Yangtze river.

Zhou zhuang in the rain, holding an umbrella to take photos is indeed some inconvenience, but the scenery is really different from ordinary days. Long blue SLATE has been washed by the rain rub bright, street lights illuminate on both sides of the stone road, orange light like ink painting dizzy, cold SLATE and warm light in this moment of integration, this is the charm of rain.

On the way, I met very few tourists, I don’t know whether it was the rain or the cold in winter. Once in a while, I saw a curl of smoke floating on the white walls and black tiles. It was probably the old man who got up early who was lighting the stove.

The residents of Zhouzhuang get up much earlier than you think. When I set foot on the main street, someone was already walking home with the fresh food. The breakfast shops along the street are already smoke-filled, after all, they have to rely on these delicacies to earn the first bucket of gold of the day. Although the town has been well developed, it is still home to more than 600 indigenous people. Although most of them are old people who do not want to leave, they are still the most primitive and beautiful scenery in Zhouzhuang.

In a short while, we came to the most famous sign of Zhouzhuang — shuangqiao. It is the starting point of Zhouzhuang famous in the world, and it is also the place where people must take photos and punch in when they come to Zhouzhuang. A stone arch bridge, a stone beam bridge, they are like a pair of twins, located on the water, communication between the two sides of the three. The hsu brothers who built them probably never imagined that the whole town would become known to the world because of these two Bridges.

I have been to many ancient towns and seen many ancient Bridges. Why shuangqiao and Zhouzhuang? Perhaps, everything has its own destiny. The clear yinjiang river and the north and south city river meet in the northeast of the town and form a cross. The stone arch bridge crosses the north and south city river. At the east end of the bridge, there is a stone step approach bridge that extends into the streets. The bridge deck is horizontal and vertical, and the bridge tunnel is round.

Double Bridges are also known as key Bridges. Many people say that the connection between the two Bridges resembles an ancient key, but in my opinion, it is a complete combination of key and lock. The round stone arch bridge is the key, and the square stone beam bridge is the lock. At this time, the half of the key has been inserted into the lock, waiting for someone to open it.

Standing on the bridge, you can see the scenery on both sides. White walls, green and black tiles, curved Bridges, leisurely OARS, street shop fog, time seems to stop at this moment… At this point, without too many words, quietly stand, taste the air filled with simplicity and quiet is good.

A shen hall, a legend of the richest man in jiangnan

Seven into the five gate of shen hall, in fact, not only from the gate, the gate of the dock is also the exclusive shen. “Sedan from the door, the ship in their own”, this is a large family only have a way of life. The third into the parlor is the legendary bench. Such honored guest, tea but 3 cups please enter the VIP hall to meet with host, if not nearby take a reason of person, 3 cups of tea serve, can see off a guest. Acacia table, qianshan hundred life chart, cover table…… All of them show that the shen family’s financial resources and ideas keep pace with The Times.

Wang Zhaojun, One of the Four Beauties in Ancient China
Bike Sharing in China, the Kingdom of Bicycles
The Small Seven-hole Bridge
Yalong Bay, the No.1 Beach in Sanya