Who Built the Terracotta Army?

One of the most famous emperors in ancient China was Qin Shihuang. Also known as Ying Zheng, he ruled the Chinese state of Qin from 247-210 BC. After he came to power, Chinese vassal states fought fiercely for their advantages. He died in 210 BC, unified the warring states period, became the first emperor of China, and established the Qin dynasty. 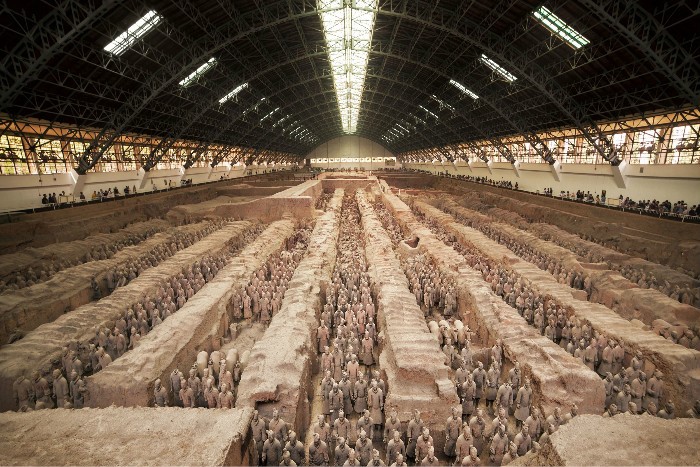 During the reign of Qin Shihuang, massive construction projects were carried out to help build the infrastructure needed for an imperial China, often at the cost of many lives. The first version of the Great Wall of China was built during this period and was also the first national road system.

The most famous remains of Qin Shihuang’s reign are his mausoleum in central China’s shaanxi province. Construction began in 246 b.c., and in addition to the emperor’s tomb, there were large palaces, valuables, rivers of mercury and landscapes painted on the ceiling. But the most striking feature of the tomb is the emperor’s guard: the terra-cotta warriors. The 8,000 soldiers, made of molds and clay, guarded the emperor’s tomb to help him after his death.

Like other construction projects during the reign of Qin Shihuang, the construction of the mausoleum required a large labor force. It is estimated that 700,000 workers were involved in the construction of the mausoleum alone. In 2003, hundreds of remains were unearthed near the tomb. They are believed to be the remains of workers who built the monument, and a preliminary examination of their bones showed that they had been engaged in strenuous physical Labour until their death. But because the remains were poorly preserved, scientists were unable to determine the ethnic origin of the workers. With a vast territory and a population of 22 million, these workers could have come from anywhere. So the Chinese scientists decided to directly examine the mitochondrial DNA of these workers to discover their ethnic origin.

Heavenly Stems and Earthly Branches in China
South Luogu Lane,One of the Oldest Neighborhoods in Beijing
Cycling in the North West of Yunnan
Qianling Hill Park, a 4A National Tourist Attraction