The Oriental Pearl Tower is a TV tower in Shanghai, China. Its location at the tip of Lujiazui in the Pudong district, by the side of Huangpu River, opposite of The Bund makes it a distinct landmark in the area. It was designed by the Shanghai Modern Architectural Design Co. Ltd. Construction began in 1990 and the tower was completed in 1994. At 468 m (1,535 feet) high, it was the tallest structure in China from 1994-2007, when it was surpassed by the Shanghai World Financial Center. It is classified as a AAAAA scenic area by the China National Tourism Administration. 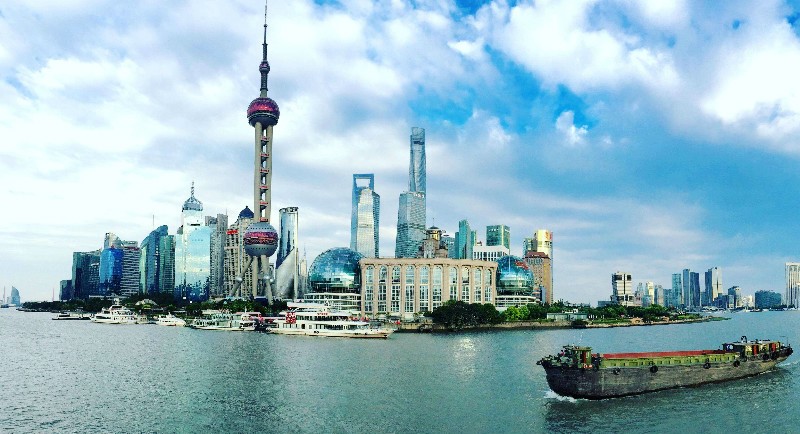 Why is Oriental Pearl Tower special?

Ranking as the fourth tallest building in Asia, the Oriental Pearl TV Tower is member of the World Federation of Great Towers. 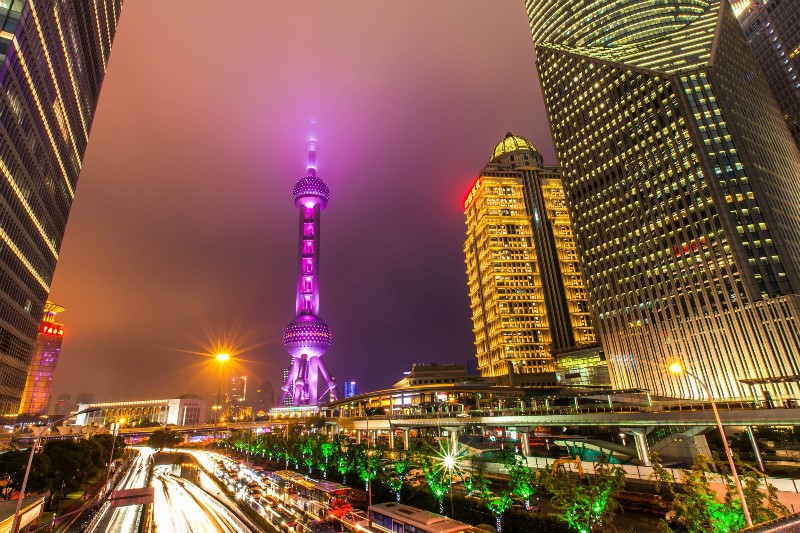 The Oriental pearl Tower is a mixed-use tower with telecommunications transmitters broadcasting over 50 miles, a hotel, a restaurant, and several observation decks. Despite a modern look with metal and concrete, the design is rooted in traditional Chinese culture. The definitive elements of the tower are its eleven spheres or ‘pearls’ distributed along its entire height. The largest pearl is 50 meters in diameter near the base, and the second largest pearl is 40 meters in diameter near the top. When looking at the tower from afar, it appears as though pearls are dropping from the sky onto a lush green plate that symbolizes jade. Thus, the two extremely valuable Chinese gemstones are represented in its structure. 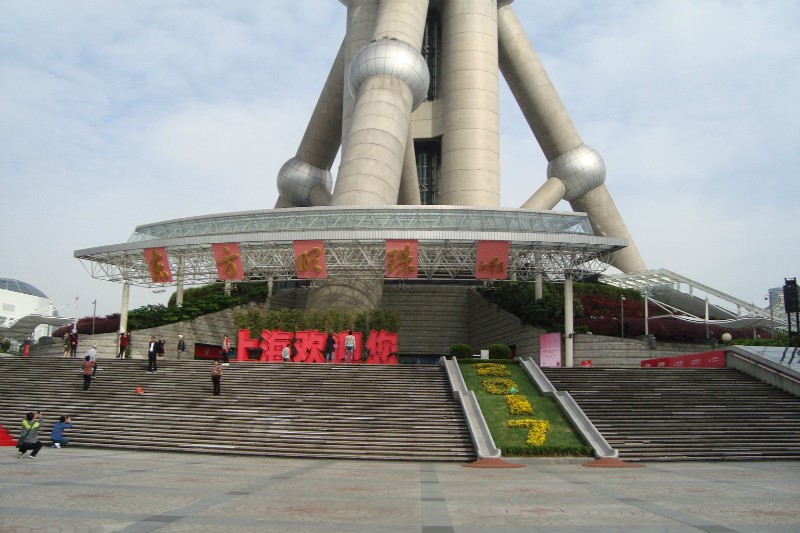 Visitors travel up and down the Oriental Pearl Tower in double-decker elevators that can hold up to fifty people at the rate of seven meters per second. The elevator attendants recite an introduction to the TV Tower in English and Chinese during the rapid 1/4-mile ascent. Once you reach your destination, you will be amazed at the variety of activities available as the various spheres and columns actually house places of interest, commerce, and recreation. 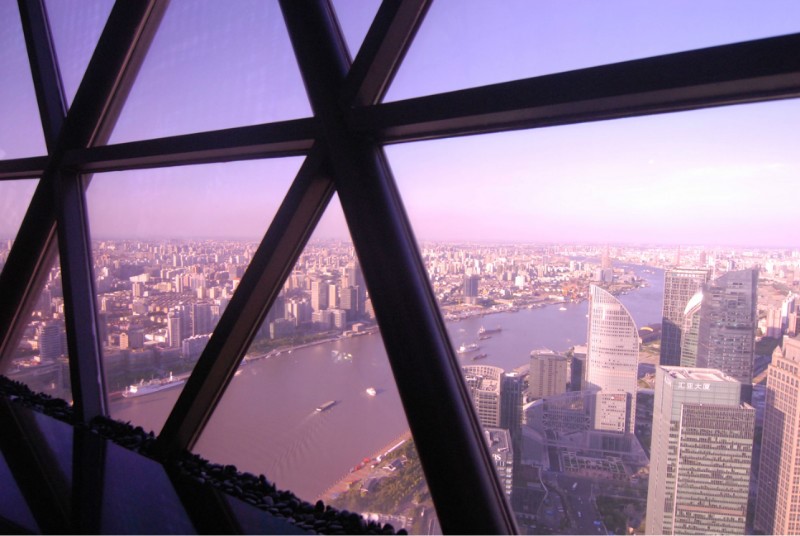 The inner is a recreational palace, while the Municipal History Museum is located in the tower’s pedestal. The large lower sphere has a futuristic space city and a fabulous sightseeing hall. From here, on a clear day a visitor can see all the way to the Yangtze River. The base is home to a science fantasy city. The five smaller spheres are a hotel that contains twenty-five elegant rooms and lounges. The pearl at the very top contains shops, restaurants, (including a rotating restaurant) and a sightseeing floor. The view of the city from this height fills you with wonder at the beauty that surrounds you. When viewed from the Bund at night, the three-dimensional lighting makes it a delight of brilliant color. 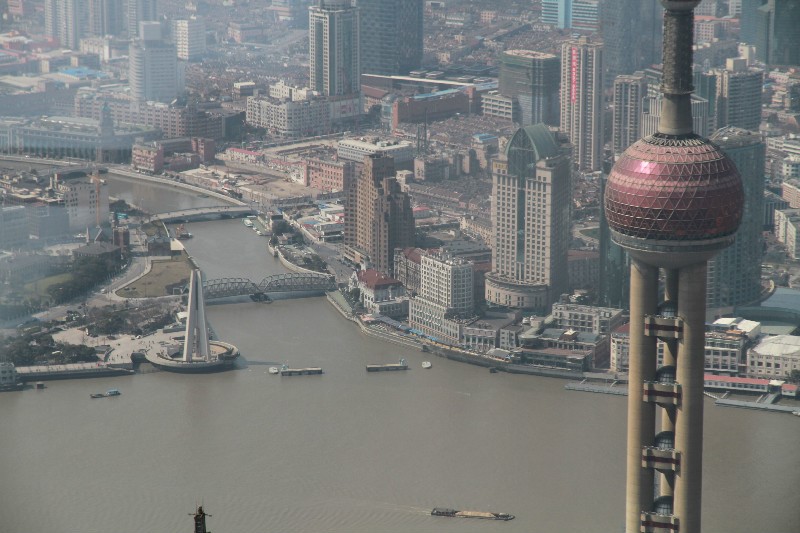 The tower features 11 spheres, big and small. The two biggest spheres, along the length of the tower, have diameters of 50 m ( 164 ft ) for the lower and 45 m ( 148 ft ) for the upper. They are linked by three columns, each 9m ( 30 ft ) in diameter. The highest sphere is 14 m ( 46 ft ) in diameter.The entire building is supported by three enormous columns that start underground.

The tower has fifteen observatory levels. The highest is at 350 m . The lower levels are at 263 m and at 90 m. There is a revolving restaurant at the 267 m level. The project also contains exhibition facilities, restaurants and a shopping mall. There is also a 20 room hotel called the Space Hotel between the two large spheres.

The design of the building is based on a verse of the Tang Dynasty poem Pipa Song by Bai Juyi about the wonderful sprinkling sound of a pipa instrument, like pearls, big and small falling on a jade plate. Seen from afar, the Yangpu Bridge and the Nanpu bridge seem like two Chinese dragons frolicking with the pearls of the Oriental Pearl tower.

The Pearl Tower attracts over three million visitors each year.