Shrimp meat has the characteristics of delicious taste and rich nutrition, among which the calcium content is the crown of all kinds of animal and plant food, especially suitable for the elderly and children to eat. It also contains the trace element selenium, which can prevent cancer. 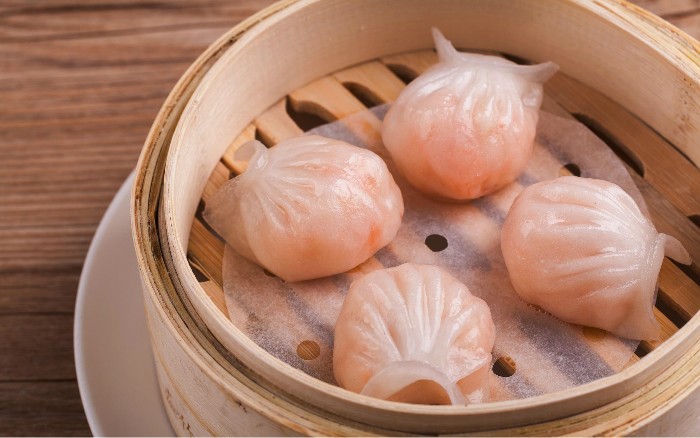 Wufeng township rich in fish and shrimp, tea master with pork, bamboo shoots, made into meat. At that time, shrimp dumplings were made of rice noodles with thick leather, but the shrimp was delicious and soon became popular. The city’s tea house will be introduced shrimp dumplings, after improvement, with a layer of Chengmian leather wrapped with one or two shrimp as the main filling, the size of the portion is limited to a bite.

Legend has it that when the village is very prosperous, beautiful place, a river on both sides, the river often have fishing boats to sell fish and shrimp. In order to attract customers, the owner of this restaurant has come up with a novel idea, buying local fresh shrimp, with pork, bamboo shoots and other fillings to make shrimp dumplings. At that time, shrimp dumpling skin thick not bright, but because of novelty, taste and delicious, won the diner’s like, soon became famous in Guangzhou, the major restaurants to produce and sell, and by the dim sum teacher’s reform, the raw material with flour into “clear powder”, the effect is particularly good, more attract guests.

The Benefits and Significance of China’s High-speed Rail
Suzhou Grand Canal
Qingyan Ancient Town, One of the Most Famous Historical Towns in Guizhou
Mount Everest, the Highest Peak in the World