The whole gorge is about 20 kilometers in length and is divided into three sections, the Upper Tiger Leaping Gorge, the Middle Gorge and the Lower Gorge; there is a ‘Tiger Leaping Stone’ in each section, legend said that tiger once jumped across the Jinshajiang River by using the big stone as its stepping-stone. We can also regard the high path hiking of the gorge as the fourth part.

While the trail is well maintained and not too strenuous, it does feature some steep climbs, so it’s probably not the best choice for small children or those with mobility issues. You can embark on a 1-2 day trek via the upper trail, which will allow you to avoid the crowds and see more of the gorge. 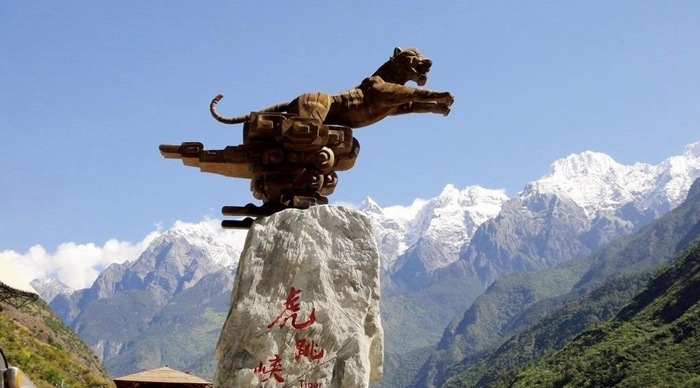 The name of the Tiger Leaping Gorge comes from a legend. The story goes like this: once upon a time, there was a tiger trying to leap across the narrowest part of the gorge, which was merely 30 meters wide. The reefs in the gorge are grotesque in shape. There are 21 rapids, 10 waterfalls and 10-meter drops along the Golden Sand River.

The Tiger Leaping Gorge is recognized as the first gorge of the Yangtze River. In the early 1930’s, an American scholar Joseph F. Rock, flew over the gorge three times and took a lot of photos of the gorge; these photos were published making the Tier Leaping Gorge one of the most famous and popular adventurous spots for explorers all over the world. It is also regarded as one of the top ten hottest hiking routes in China. Flowing through the mountain pass of the upper gorge, swashing the Tiger Leaping Pebble and sandwiched by two snow-capped mountains, the Golden Sand River is such an amaze and wonder. Violent whirlpools, fierce strikes to the river banks, soaring waves, shrouding clouds and mist create an unbelievably adventurous holy land that attracts tens of thousands explorers and adventurers.

This section is about 9 kilometers from Qiaotou village. The upper gorge has the most torrential waters, it is a grand sightseeing.  You can see a more magnificent views than the middle gorge, also the guardrails and other protective facilities of the Tiger Leaping Gorge Upper section are the best.  The most famous scenic spots are the Mouth of the Gorge and the Tiger Leaping Pebble, both of which are on the upper gorge.The Mantianxing Reefs Area and the Yixiantian in the middle gorge are the two most famously known dangerous spots. One can tell the arduousness from their names, Mantianxing Reefs meaning that there are so many reefs that it looks like a starring sky, and Yixiantian meaning huge rock cracks. 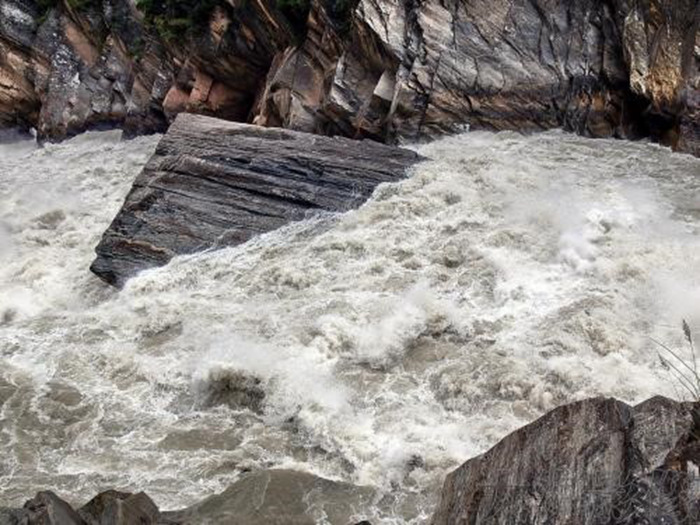 The most perilous section is the Middle Tiger Leaping Gorge, which features a huge drop in water level. Six km away from the upper gorge is a waterfall where the river crashes down over 100 meters hitting the rocks in the river bed and creating violent currents.

In one 100-meter section are numerous reefs, and the current is torrential. The gorge is rarely traversed by humans, but on the slope between the Middle and Lower Tiger Leaping Gorge there is a small village — Hetaoyuan Village, which has little contact with the outside, and where villagers lead a simple and natural life, dwelling in stone-plate houses. 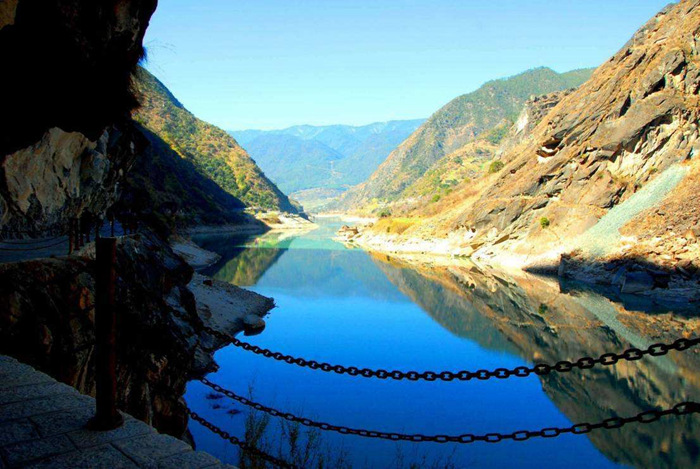 The most important sight in the lower gorge is the Feixing Rapids, from which people can look down on the unconstrained Jinshajiang River. A 32 km long road from the Haba Mountain to Jiangbian Village has been opened to traffic, but traveling on foot is much more interesting.  From here to the Yi village of Sanba is about the same, following trails. You could just follow the road and hitch with the occasional truck or tracker but this way is longer and less scenic. Some hardy mountain bikers have followed the trails but this is really only fun from north to south, elevations being what they are. 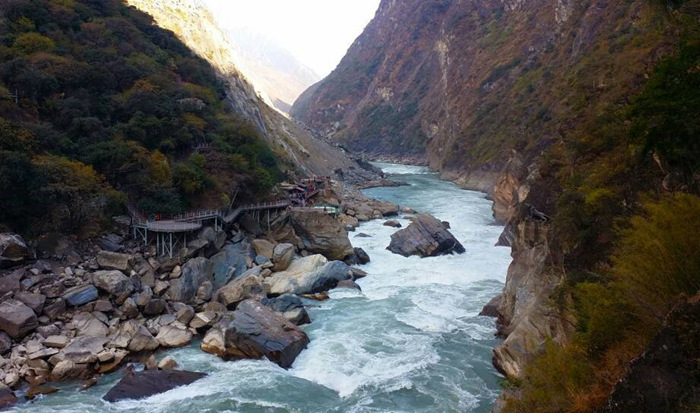 Best time to visit: Spring is the best time as the river turbulence is at its peak (melting snow flows down from the Himalayan mountains). Fall is the second best period because of its generally pleasant weather. Rains are heaviest during late summer

Xiamen in Winter, My Travels to Xiamen
Bangchuidao Scenic Area, One of the Best Lidos in Dalian
Mount Heng - North Yue, enjoy the Jinlongxia, Gusongqidong, Taodong and other natural landscape
The Potala Palace, The Highest Ancient Palace in the World