The hometown of the yellow emperor was the place where he was born, grew up and established his capital. It is located in xinzheng, 40 kilometers south of zhengzhou. In the han dynasty, xuanyuan temple was built here to commemorate the yellow emperor. After more than two thousand years of deterioration and restoration, the present yellow emperor hometown scenic spot came into being. Now it is the most important place for Chinese at home and abroad to worship their ancestors. 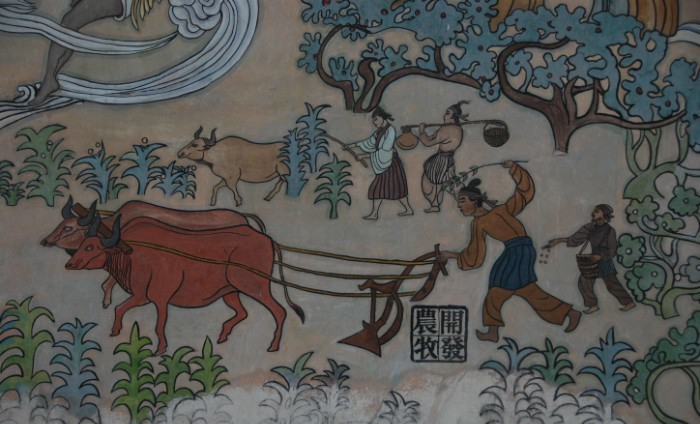 China’s surname square is carved with more than 4,600 surnames with abstract patterns of auspicious clouds. At the center of the Chinese surname square is the yellow emperor treasure tripod. At 6.99 meters (22.93 feet) tall, 2.8 meters (9.2 feet) deep, 4.7 meters (5.1 yards) in diameter, and weighing 24 tons, the tripod is the largest in the world. Its feet are in the shape of a bear, because “bear” means “bear”. Its belly is decorated with patterns of Kowloon, fireball and water, meaning to pray for good weather, crops and stability in the country.

Ancestor worship ceremony is a very special folk cultural activities, every year on the 3rd day of the 3rd lunar month – the birthday of the yellow emperor. On that day, people wear clothes bearing their surnames to worship their ancestors. There are nine items on the agenda, including a 21-gun salute, gift of flower baskets, cleaning hands, burning incense, worshiping gods, chanting sutras, chanting hymns, religious dances, blessing the Chinese nation and finally blessing the unity of heaven and man.

Regong Art, the Jewel in the Crown of the Tibet Culture
Hangzhou cuisine- A Bite of Hangzhou, Hangzhou cuisine and brother cuisine are becoming more and mor...
50 Moganshan Road Art Gallery in Suzhou
Sun Island Scenic Area, the Deer Garden