As a symbol of ancient xi ‘an, the big wild goose pagoda is a well-preserved ancient building and a holy place for buddhists. It is located on the southern outskirts of xi ‘an city, about 4 kilometers (2.5 miles) from the city center. Standing in the grand cien temple complex, it attracts countless tourists because of its buddhist reputation and its simple but attractive architectural style. The big wild goose pagoda has been rated as a national key cultural relic protection unit and an AAAA tourist attraction. On June 22, 2014, it was added to the world heritage list along with other sites along the ancient silk road. 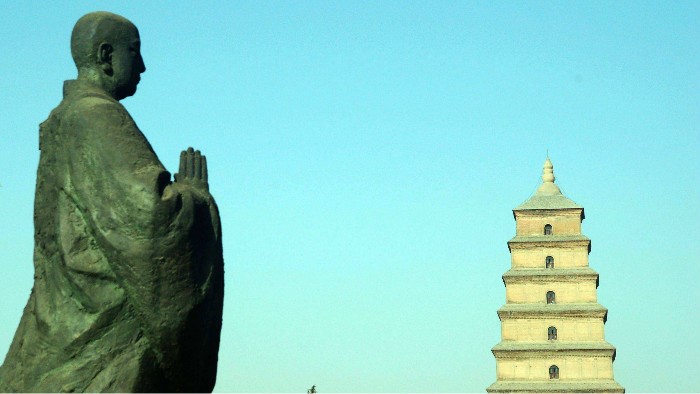 Built during the reign of emperor gaozong of the tang dynasty (652), the pagoda was used to collect buddhist materials that xuanzang had brought from India.

Xuanzang set out from chang ‘an, followed the silk road, crossed the desert and finally arrived in India, the birthplace of Buddhism. Over 17 years and more than 100 countries, he acquired buddhas, 657 buddhist scriptures and several shrines. Xuanzang was the first abbot of the great ci ‘en temple. He received permission from emperor gaozong (628-683) to supervise the construction of the pagoda. With the support of the royal family, he invited 50 ranks of people to the temple to translate the Sanskrit buddhist scriptures into Chinese, totaling 1,335 volumes, opening a new era in the history of translation.

Originally built at a height of 60 meters (197 feet), the big wild goose pagoda has five storeys. It is now 64.5 meters (211.6 feet) high and has two more. It is said that “saving one life is better than building seven towers”. From the outside, it looks like a square cone, simple but magnificent, a masterpiece of buddhist architecture. It is built of brick and has a strong structure. Inside, the stairs curve upward, allowing visitors to climb up from vaulted doors on the four sides of each floor to get panoramic views of the city. The wall is carved with the exquisite Buddha statue of yan liben, a famous artist in the tang dynasty. The stone tablets of famous calligraphers also add to the beauty of the pagoda.

As to why it is called the big wild goose pagoda, there is a legend. According to ancient buddhist stories, there are two branches, one of which eating meat is not taboo. One day, they couldn’t find meat to buy. As a flock of geese flew by, the monk said to himself, “there is no meat to eat today.” I hope the compassionate bodhisattva can give us some. Just then the lead goose broke its wings and fell to the ground. All the monks were surprised and thought that the bodhisattva showed his spirit to make them more pious. They built a tower where the geese fell and stopped eating meat. Hence its name.