Mingsha Mountain In China, It is close to the downtown of Dunhuang, without the harsh and extreme climate and convenient facilities are equipped

Mingsha mountain has been formed for more than 3,000 years, and the record of mingsha has a long history.

It is a strange but universal natural phenomenon. In a desert or dune, due to the influence of various climatic and geographical factors, fine grains of sand, mainly quartz, are caused. Due to the vibration of the wind, the sand slides down or moves with each other, numerous grains of sand rotate in the airflow, and the place where the surface cavity causes the “diabolo” effect is buzzing is called the singing sand.

In the western part of China, mingsha is mainly desert. These dunes are piled into mountains, so they are also called mingsha mountains.

For people who want to take a short stay in desert, the Mingsha Mountain and Crescent Lake Nature Park is the best choice. It is close to the downtown of Dunhuang, without the harsh and extreme climate and convenient facilities are equipped. The easy walking trails allow different ages of tourists to explore the desert.

Dunhuang Mingsha Mountain (Echo Sand Mountain) is a sand mountain range hich stretches from the cliff where the Mogao Caves locates, to the Danghe Dam on the west. It is about 40km in length, 20km in width, 100m in average height. The highest altitude is 1650m.

The Mingsha Mountain is composed of tinny hyaline sands of five different colors – red, yellow, blue, white and black, and winds its way up and down showing different shapes. Some of the sand dunes stand like a golden pyramid, some lie as the fish scale, some wave like a snake. 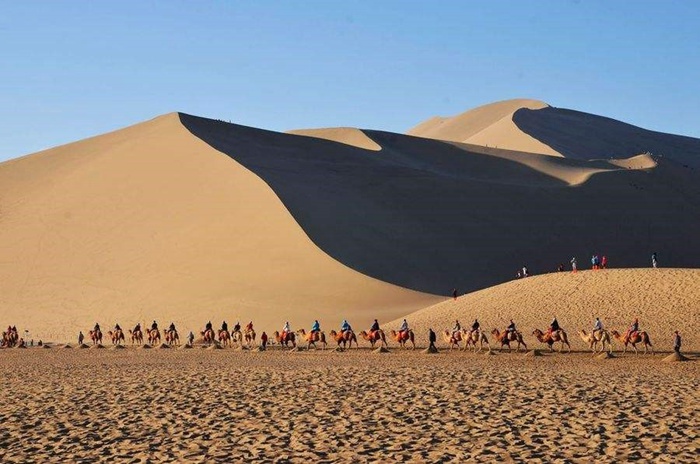 The Sea of Clouds in the Mount Huangshan
Chinese Wood Carving, Originated in Neolithic Period
West Lake - The Most Popular Place in Hangzhou, has a total area of 49 square kilometers
Top Three Buddhist Temples in Chengdu, Wenshu Monastery,Baoguang Temple,Zhaojue Temple