Located in the east islands of Zhejiang Province, Putuoshan Mountain is the abode of Avalokitesvara. It is one of the Four Sacred Buddhist Mountains in China with Mount Emei in Sichuan, Mount Jiuhua in Anhui and Mount Wutai in Shanxi. Putuoshan Mountain fully shows the beauty of both mountain and sea, so it is recognized as a National AAAAA Scenic Area and honored as the Buddhist Kingdom on the Sea and the Sacred Land of the South China Sea.

Putuoshan Mountain’s original religious activities date back to the qin dynasty, when Taoist gods practiced alchemy here, and remnants can still be found today. In 847, a foreign monk came to the cave and felt the goddess of mercy. During the song and yuan dynasties, putuo mountain developed rapidly and its economy flourished. In its heyday, it was known as the largest buddhist kingdom in China, with 4 large temples, 106 small temples, 139 huts, and 4,654 monks.

Puji Temple is the main temple of Putuoshan Mountain and all important Buddhist activities are held here. Covering an area of 37,019 square meters, it contains Grand Yuantong Palace, Hall of Heavenly Kings, Depository of Buddhist Sutras and 357 other buildings. Fayu Temple was built along the uphill with grand building groups and extraordinary manners.Among the 294 halls of Fayu Temple, Nine Dragons Guanyin Palace(also called Grand Yuantong Palace), said to be a Buddhist Temple transported from the imperial palace of Ming Dynasty, acts as the most magnificent one.

With unique shapes and vivid images, it enjoys high artist value and is listed in Three Treasures of Putuoshan Mountain.The halls and yards of Huiji Temple were constructed in traditional Garden-Architecture Style in Zhejiang and Jiangsu In the Grand Palace is worshipped Shakyamuni with his two disciples. Southeast of the Grand Palace is a Bell Tower with double eaves. Climbing to the top of the tower and ringing the big bell, you will get a good luck. As you stand in the peak of Bell Tower, have a distant view of the mountains, sea, reefs, beaches and buildings. In the whole temple, statues, carvings and pictures of Guanyin can be found everywhere. The images of Guanyin in thousands of poses must catch your eyes and are honored the essence of Buddhist art in Putuoshan Mountain. 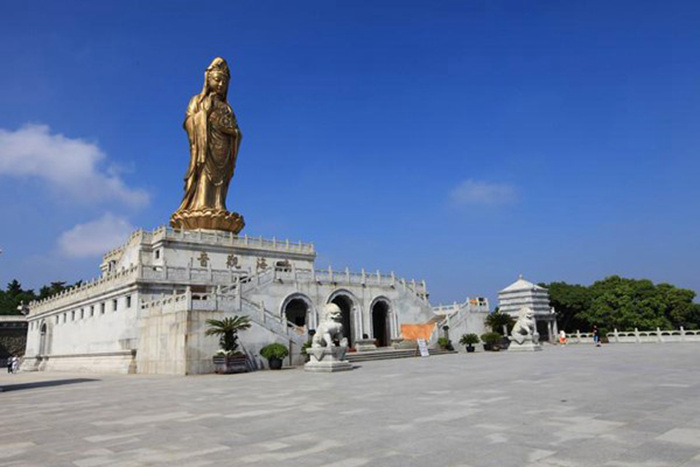