As visitors wander around, they marvel at these natural stone masterpieces and are drawn to their complex structures. Spectacular, exotic, and steep landscapes create a myriad of labyrinthine vistas, including:

Big stone forest, small stone forest and the ancient stone forest have different forms of stone. Animals, plants and even people can be found here. Some are elegant, some are rough, lifelike, each with its own characteristics. 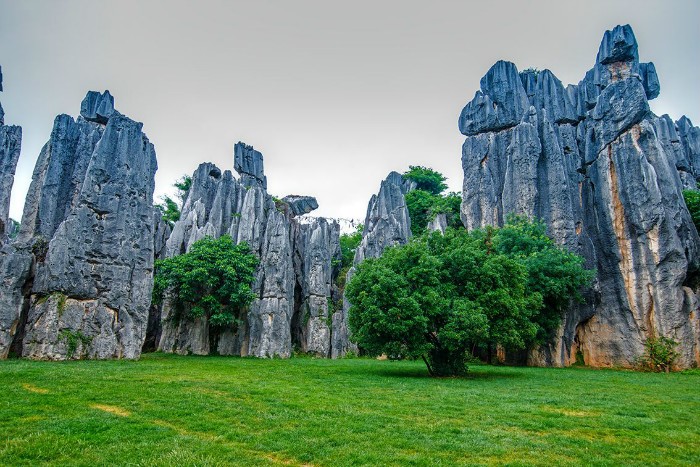 The Zhiyundong underground stone forest, which is distributed in several underground caves, covers a total area of about 3 square kilometers (720 acres).

Qifeng cave is composed of Pengfeng cave, Hongxi spring and underground river. From August to November, two to three minutes of wind swept through the cave every 30 minutes.

Dragon lake is a karst lake, 3 km (2 miles) long, but only 300 m (0. 2 miles wide. The lake is characterized by underwater stalagmites and stalactites, with an island in the center of the water.

Geologists say the Stone Forest is a typical example of karsts topography. Approximately 270 million years ago – during the carboniferous period of the Paleozoic era – the region was a vast expanse of sea. Over time, the movements of the lithosphere gradually caused a retreat of the waters and the rise of the limestone landscape. Due to constant erosion by the elements, the area finally developed into the present-day appearance.

Many beautiful legends originated in this magical place and have been handed down by the Sani people, a branch of the yi people. Ashima was a beautiful, intelligent and warm-hearted Sani girl whose faithful love was the most popular story that has been told for thousands of years. The Sani people celebrate their national festival, torch festival, on June 24 of the lunar calendar. They take part in traditional performances such as wrestling, bullfighting, pole climbing, dragon lantern play, lion dance and a-xi moon dance. During this time, the place is filled with a particularly festive atmosphere, making the area even more attractive than usual. However, the stone forest – whose carvings are made by nature herself – has always been a true marvel to visitors.