Xuyuan Garden was built in the Ming Dynasty. It was named after the prince Zhu gaoxu who lived here. Xuyuan Garden later became the residence of the governors of Zhejiang and Jiangsu. Xuyuan, also known as Xiyuan, is located on the west side of the palace of Taiping Heavenly Kingdom (1851-1864). The kingdom was founded by a peasant leader, Hong Xiuquan, who declared himself king. Xuyuan Garden later became the presidential palace of Sun Yat Sen (1912-1949), the interim president of the Republic of China. Visitors will find that Xuyuan Garden is the epitome of modern Chinese. 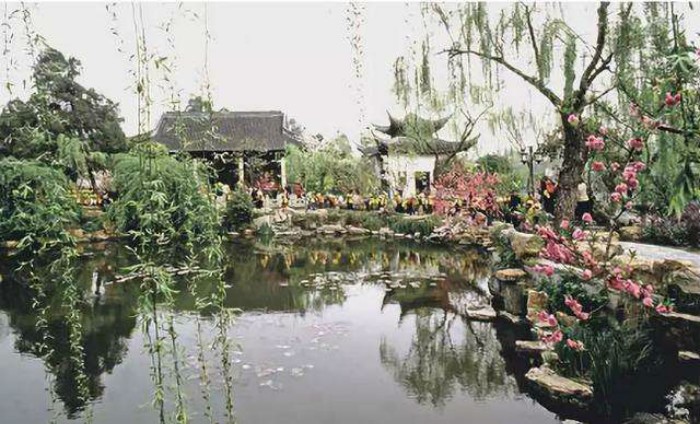 While Xuyuan Garden in Nanjing City, Jiangsu Province covers an area only a little more than four acres (1.6 hectares), it occupies an important place in Chinese history. Despite its relatively small size, it is also renowned for its unique southern China gardening style. It is located in the Presidential Palace, at No. 292 on Changjiang Road. 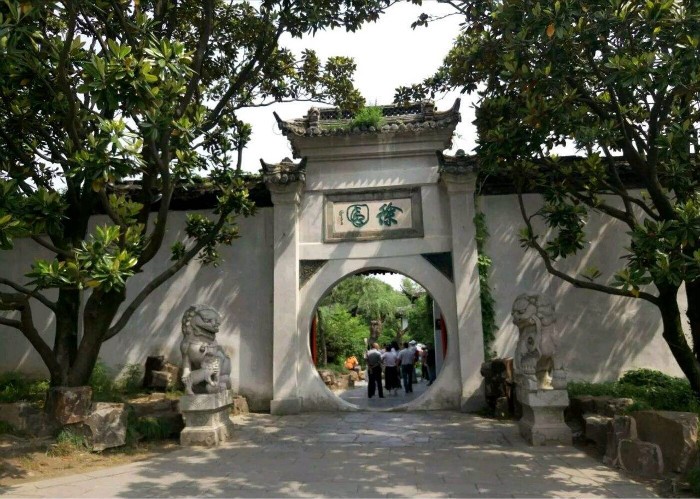 Xuyuan Garden’s scenery is definitely worth viewing especially because of its historical significance. It is one of the two most famous gardens in Nanjing City, the other being Zhanyuan Garden. With water covering about half an acre of its total area, Xuyuan Garden is small, but exquisite. Its architecture is rather ingenious, exhibiting the unique beauty and charm of southern gardening. One of the most popular spots here is Buji Zhou, a handcrafted stone boat. Other attractions include Tongyin Guan; Xijia Lou; Wangfei Pavilion and Yuanyang Pavilion. 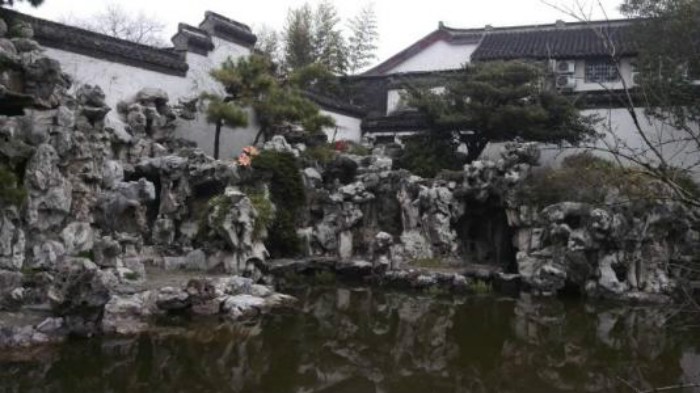 Buji Zhou was built in 1746 by Yin Jishan, governor of Zhejiang Province and Jiangsu Province. The stone boat has become a symbol of Xu Yuan. It’s made of marble, 14.5 meters long (about 47 feet), 4.6 meters wide (about 15 feet), and 2.7 meters high (about 9 feet). Its roof is covered with yellow glazed tiles. Its brick railings are carved with many fine colored paintings on both sides of the boat. The ship is divided into fore and aft compartments. There is a stone walkway leading to the ship. The ship was named and inscribed by Emperor Qianlong of Qing Dynasty (1644-1911) during his tour in southern China. Buji state has two meanings: one is about its lakeside; the other is about the belief that the country can enjoy permanent stability only with the support of the masses. Xu Yuan’s breeze blowing, the lake ripples, giving people a feeling of boat floating on the waves.

At present, 222 confirmed cases and 31 discharged cases have been reported. There are 6 severe cases, 8 critical cases. The first death case in Guangxi occurred in Hechi. 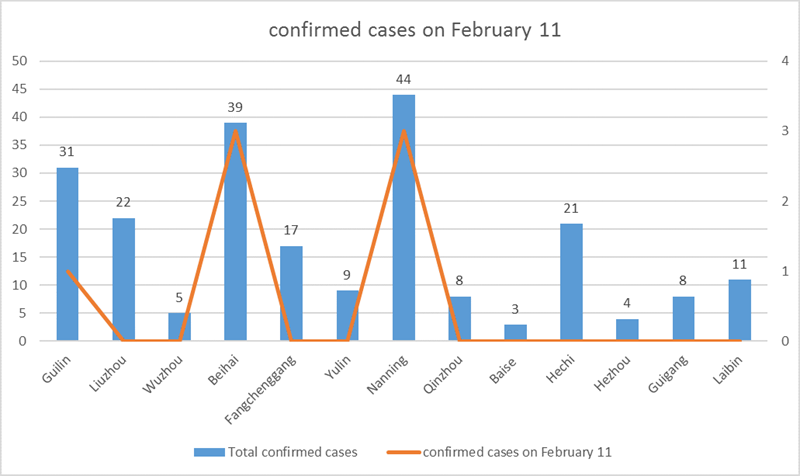 At present, 12519 close contacts have been traced and 3803 cases are still under medical observation.

In history, only “Greater Shanghai” and “Greater Wuhan” have been labeled as “Greater” among all the Chinese cities. On the eve of the founding of the People Republic of China, Hankou was bigger than Peiping (old name for Beijing) at that time. “No matter how fast or slow you walk, you can’t walk out of Hankou in just one day.” This saying reflects the area of Hankou, which is only one of the three towns in Wuhan.

Historically speaking, Wuhan was originally formed by the merger of Hankou, Wuchang and Hanyang on May 16, 1949.

Today in Wuhan, there are 8 bridges on the Yangtze River, 6 bridges on the Han River and 74 parks in the urban area. The Third Ring Road in Wuhan is much larger than the Sixth Ring Road in many other cities. It will take more than three hours for a 300 km/h high-speed train to run around Wuhan.

Wuhan, with an area of 8569.15 square kilometers, has a total population of more than 14 million by the end of 2019, including 9.08 million household registered population and 5.1 million mobile population.

One of Nanjing’s famous scenic spots, Linggu Temple, which claims to be ‘the best Buddhist temple in the world’, is situated to the east of Dr. Sun Yat-sen’s Mausoleum in the Purple Mountain Scenic Area. Over time, its name has changed several times. 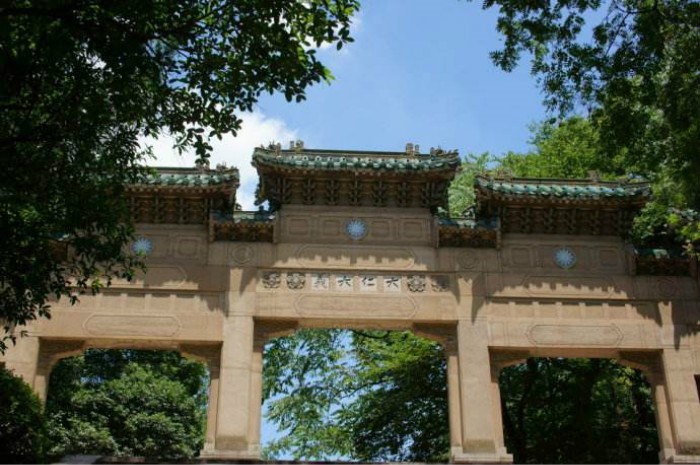 The environment here is very pleasant. The Linggu Temple is surrounded by aged dark green trees. The sweet fragrance of flowers pervades, and the sound of the bell is melodious. The forest and springs around add vitality and wild pleasure to the temple. Linggu Temple is famous in Chinese history. It is said that in the Ming Dynasty, Linggu Temple flourished. Crowds filled the place to burn joss sticks. It is said that it could hold 1,000 monks at that time.

Linggu Temple contains the Xuanzang Memorial Hall, which was built in memory of a famous monk in the Tang Dynasty (618-907). The picture of the route that Xuanzang walked and the sutra he translated are also stored here. There are also several other sights such as Non-beam Hall, Linggu Pagoda and Songfeng Pavilion. 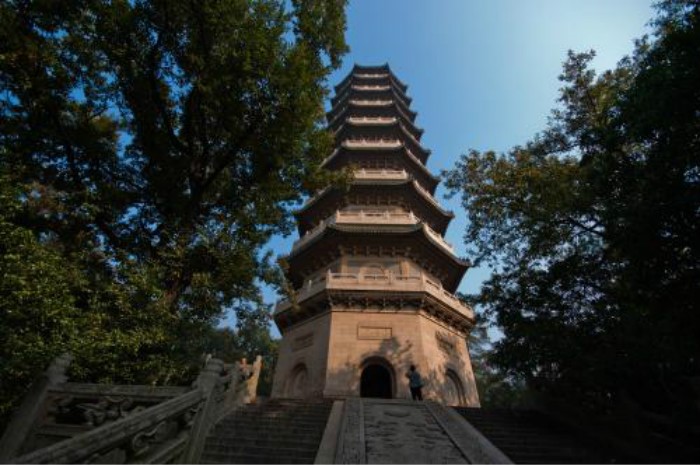 The name of Non-beam Hall has interesting origins. Originally the temple was named Wuliang Hall as a memorial ceremony, for a Buddha named ‘Wu Liang’ was held there. Because it is constructed without any wood, it can also be called ‘Non-beam Hall’. However, ‘non-beam’ is also pronounced ‘Wu Liang’ in Chinese. 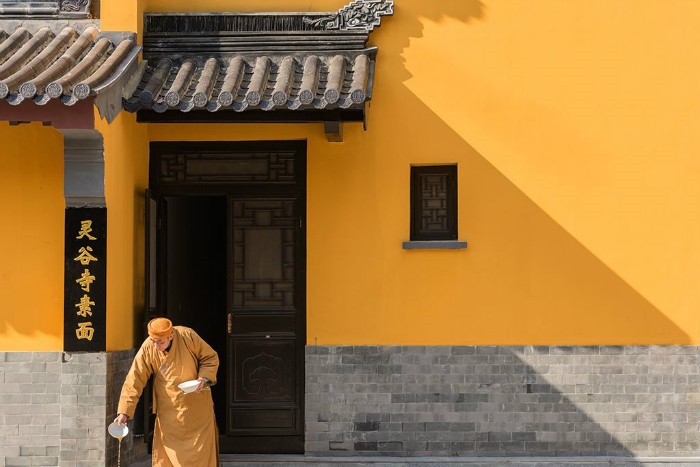 The vegetarian diet here is renowned for over 600 years. The ingredients of the dishes are chosen very carefully; the cooking is very meticulous; the appearance of the food is also very nice. Though the dishes are without meat, the taste is even better than the ones with meat. Shensong House, the famous vegetarian restaurant in Linggu Temple, lies to the east of Songlin Pavilion. Surrounded Shensong House, is a thick forest and blooming flowers. To the east of Shensong House, a spring runs under a bridge, and to the west, the sound of the bell emanates from the ancient temple. Dining here can bring you both the wonderful taste of the food and an enjoyment of natural beauty.

During the period from 0:00 to 24:00 on February 10, 5 new confirmed cases of pneumonia were found in Guangxi, including 4 in Nanning and 1 in Beihai.

At present, 215 confirmed cases and 30 discharged cases (12 new discharged cases on February 10 ) have been reported. There are 6 severe cases, 8 critical cases. The first death case in Guangxi occurred in Hechi. 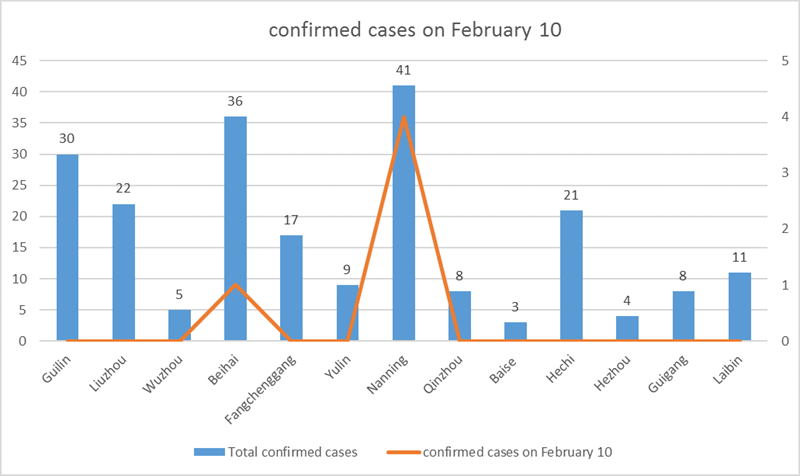 At present, 11870 close contacts have been traced and 4036 cases are still under medical observation.

The mountain is called Zijin Mountain or Purple Mountain. The whole mountain area covers an area of 3100 hectares with the highest peak of 448 meters above sea level. It is a green oasis of hills, trees, forests and hiking and cycling paths with many scattered temples, relics and mausoleums. END_OF_DOCUMENT_TOKEN_TO_BE_REPLACED

At present, 210 confirmed cases and 18 discharged cases have been reported. There are 5 severe cases, 9 critical cases. The first death case in Guangxi occurred in Hechi. 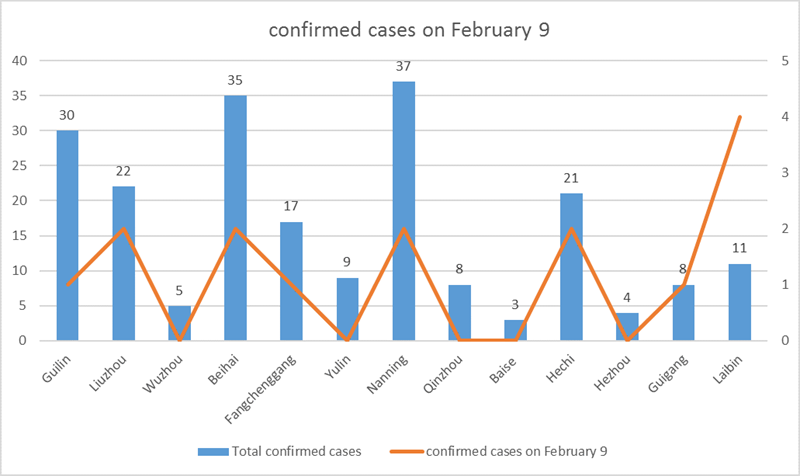 At present, 11025 close contacts have been traced and 3911 cases are still under medical observation.

Xiaoling Mausoleum is one of the largest imperial tombs in China. It is located in the eastern suburb of Nanjing at the southern foot of the Purple mountain. Emperor Chengzu, Zhu Yuanzhang, the first emperor of the Ming Dynasty and Queen Ma were buried there. END_OF_DOCUMENT_TOKEN_TO_BE_REPLACED

At present, 195 confirmed cases and 18 discharged cases have been reported. There are 6 severe cases, 7 critical cases. The first death case in Guangxi occurred in Hechi, no medical staff infection cases. 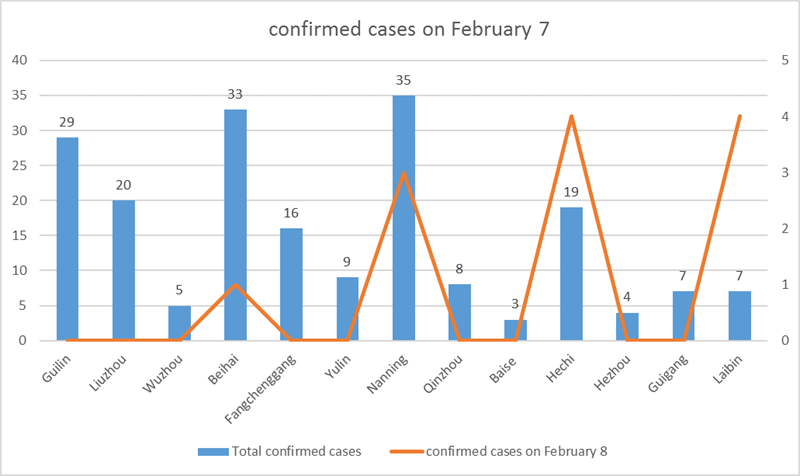 At present, 9701 close contacts have been traced and 3895 cases are still under medical observation.

On days when the sun shines and the sky is a clear blue, the sky and the water seem to meet on the horizon. Sailboats on the lake dart back and forth, appearing to joust with the billowing clouds. Rafts float along one after another like a big moving dragon. In addition, many kinds of rare birds are attracted here, making it a popular destination for birdwatchers. 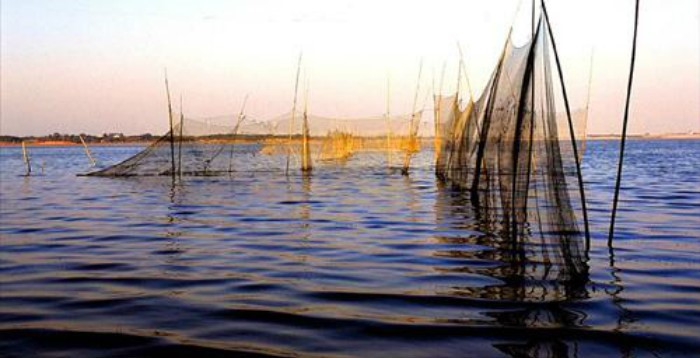 Dagu Hill is an island in Poyang Lake , which when seen from a distance, looks like a large shoe floating in the blue water. It is also known as Shoe Hill.

Actually Dagu Hill is only one peak with precipices on its three sides. Covered with tall, straight trees, the island rises steeply from the water, surrounded by water on all sides. Visitors who hike to the top of the hill are rewarded with a magnificent view of the vast Poyang Lake below. Along the way, you will see Heaven Flower Palace, with its majestic halls and splendid statues. In ancient times, the hill was a gathering place for scholars and businessmen. The buildings in which they met have been destroyed by wars and natural disasters, but you can still feel a strong sense of history on Dagu Hill. 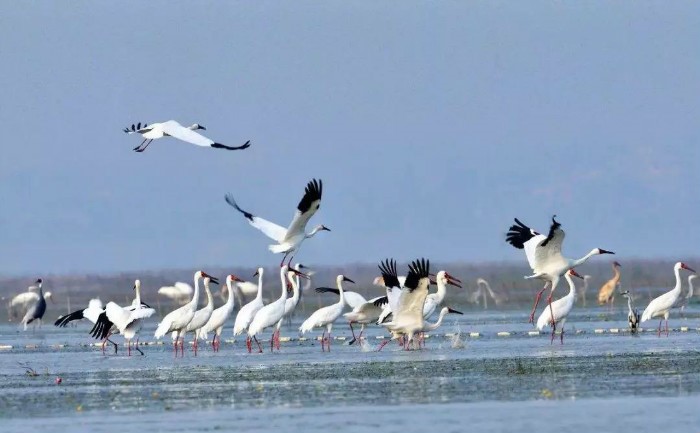 Another well known hill in the lake is Nanshan Hill, near Duchang County, which rises from the water like a dignified man standing in the waves. According to the legend, during the Western Han Dynasty (206BC-24) a wise man lived on Nanshan Hill. Emperor Wudi met the man during a tour of inspection in the southern region of his territory and offered him an official government position. However the wise man turned down the offer, saying that he was just a farmer and was not interested in fame or rank. Named for the humble wise man, ‘farmer rock’ is the main attraction of Nanshan Hill. There visitors enjoy the sight of clear, sweet spring water flowing from the rock all year round. Those who climb to the top of the hill enjoy a panoramic view of the lake and distant hills.

Lake-View Pavilion was originally constructed in the later years of the Eastern Han Dynasty (317-420) and the early part of the Three Kingdoms Period (220-280). The present exquisite pavilion was rebuilt by the local government in 1988. It has four floors and stands on a platform made of granite. The view from Lake-View Pavilion takes in the rivers, the lake, the fishing boats, and the birds that contribute to the beauty of Poyang Lake.

This area is a sanctuary for many rare species of birds. Measuring 224 square kilometers (about 86 square miles) in area, it offers a mild climate and a habitat rich in aquatic plants and fish with no industrial pollution. In winter, Poyang Lake is home to the world’s largest population of birds.

Every November, thousands of birds fly in from Siberia, Mongolia, Japan, North Korea, and the northeastern and northwestern regions of China. These migratory birds spend the long winter in Poyang Lake together with the native widgeons, egrets, and mandarin ducks, leaving gradually as the weather starts to warm in March. Poyang Lake is considered by many to be the largest bird sanctuary in the world. Every winter it plays host to 95% of the world’s white cranes, a fact that gives it two of its popular names: ‘World of White Cranes’ and ‘Kingdom of Rare Birds’.