Yuntai mountain is located in xiuwu county, henan province, covering an area of 240 square kilometers. The terrain is complex and the climate varies with altitude and topography. Thanks to its unique landscape and climate, Yuntai mountain boasts large areas of virgin forest, with more than 500 species of exotic flowers and grasses. Geographical traces are also abundant. As a result of the movement of the earth’s crust and the movement of the earth’s crust, the cloud-like landform formed a magnificent landscape of mountains and rivers. In addition to the beautiful scenery, you can also feel the rich culture.

Yuntai Mountain have been regarded as National Geopark, National Heritage and National Scenic Area of Wetlands. It is a National AAAAA Scenic Area which many nature-lovers flock to. In 13th February, 2004, UNESCO ratified it as one of the first group of World Geopark. In the October of the same year, Yuntai Mountain is reputed as a Photography Base.

The entire canyon is covered in red rock, which is very rare and attractive. Hongyan gorge set elegant, quiet, strong, steep in one, known as the first landscape in the central plains. As deep as 68 meters, like nature carved giant bonsai, so also known as “bonsai gorge.” It impressed me like Beethoven’s symphony, landscape symphony. At the southern end of the canyon is a narrow canyon called the line of the sky. The 50-meter-high white dragon falls that flow out of this narrow canyon is always a shock.

Spring waterfall gorge is located in the northwest of the whole scenic area, 3 kilometers long. Worthy of its name, there are many springs flowing from walls and valleys, including many holes, whispering springs, dragging springs, secluded springs, etc., that will take you to a wonderland. In this canyon, you’ll find tall mountains covered with lush vegetation, which makes you want to take a deep breath. Up the road, the Yuntai waterfall came into view. At 314 meters high, Yuntai falls is known as the highest waterfall in China. Lightsome white clouds soar over the waterfall of resources, like endless cotton. The waterfall splashed down into the dark green lake. 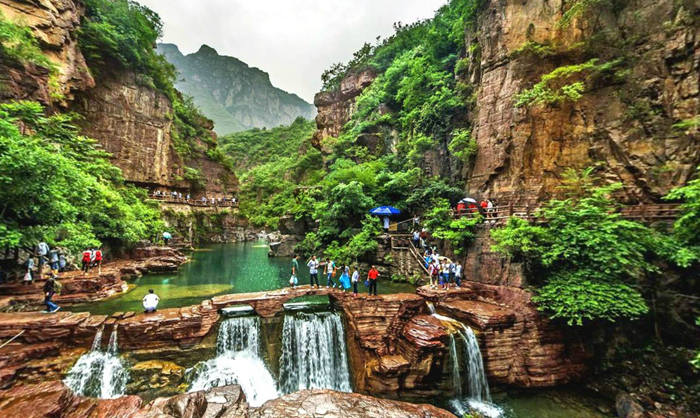 Chinese Wood Carving, Originated in Neolithic Period
Mount Wuyi, a Summer Resort in China
Dazu Rock Carvings, the County of Rock Carving
Tianfu Square in Chengdu, Tianfu square is not only the economic, cultural and commercial center of ...